Arguing With the Idiots

Although that was the title of a book, this has nothing to do with the book.  Instead, it's about all the idiots that decided, even before the storm wound down, that Sandy was the result of global warming.  Bloomberg's Businessweek looked like this today: 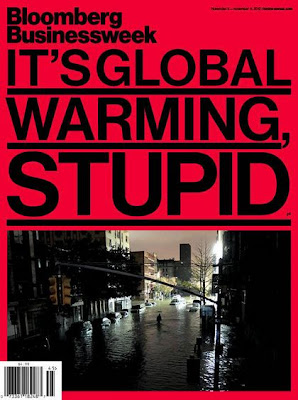 I've often thought, and stated here, that Bloomberg is the most dependable asshole in American politics.  When you need someone to do something so astoundingly stupid that even Joe "Drain Bamage" Biden thinks it's stupid, Bloomy's your boy.  Like a throwback to an insane monarch of the middle ages, or a Rasputin who gained power, he issues decrees and expects the world to jump.  Not just content to regulate salt or soft drinks larger than 16 ounces, he wants to rule everything.  Just today, the asshole "snubbed borough president Markowitz' plea to bring the National Guard to Hurricane Sandy-scarred Brooklyn".  Bloomy refused the National Guard?  Why, on God's green earth would he refuse the National Guard?


“The NYPD is the only people we want on the street with guns.”

I think I have permanent face palm.  Against this random selection of headlines from Drudge, he's going to turn down help because the National Guard are, well, highly trained soldiers?  WTF is wrong with this guy?

An earlier Bloomberg quote is only a slightly more insane:


Silence!  In addition to that, all citizens will be required to change their underwear every half-hour. Underwear will be worn on the outside so we can check. Furthermore, all children under 16 years old are now... 16 years old!

Unfortunately, it's not just Bloomy, it's everywhere.  The allegation that "hurricanes will be stronger and more frequent" is, perhaps, the weakest link to climate change that you routinely hear of.  Gore famously said that after Katrina, but as FSU researcher Dr. Ryan Maue has demonstrated (through actual measurement), the amount of energy in all the world's cyclones has been in a decline.  This year, though, has essentially been normal, with a year to date ACE of 495 vs a normal of 500.   There is no agreement between the climate modelers and the meteorologists / atmospheric physicists who study hurricanes that "warming" will create more frequent, stronger storms.  The warmists cite higher surface temperatures, but that's stupidly simplistic.  There area many more factors at work, and systems like the El Nino/La Nina pattern (also called ENSO), the North Atlantic Decadal Oscillation, the Pacific Decadal Oscillation, the Arctic Oscillation, and still more.

Roger Pielke, a "dissenting" hurricane expert stated in the WSJ,


To put things into even starker perspective, consider that from August 1954 through August 1955, the East Coast saw three different storms make landfall—Carol, Hazel and Diane—that in 2012 each would have caused about twice as much damage as Sandy.

Pielke goes on to point out what Ryan Maue's data says:


While it’s hardly mentioned in the media, the U.S. is currently in an extended and intense hurricane “drought.” The last Category 3 or stronger storm to make landfall was Wilma in 2005. The more than seven years since then is the longest such span in over a century.

So when someone like NY Governor Andrew Cuomo states


“There has been a series of extreme weather incidents. That is not a political statement; that is a factual statement… Anyone who says there’s not a dramatic change in weather patterns, I think is denying reality,” he said calmly.

what he's really saying is "I'm too young to remember those storms, too lazy to look up records, and I'm betting you're young and lazy, too".   Note the storms in this area between 1954 and 1960 (Source: National Hurricane Center). 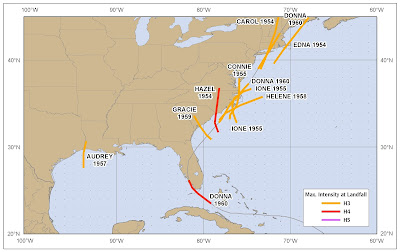 (Coincidentally, Hurricane Donna is the first storm I remember being in - I was pre-school, but I remember the rushed activity and then living on hurricane lanterns and Sterno).

In general, people don't like too many details and they especially don't like to do any math, so it's great when some "philosopher/priest scientist", preferably with a white lab coat, tells them what to think.  Caleb Shaw, over at Watts Up With That, posts a wonderful "Reply to Hurricane Sandy Alarmists" just full of snark.  Of real interest is how he compares Sandy's record storm surge to the storm of 1821. The difference between them is that Sandy hit at peak high tide, on a full moon, while the "Great Gale of 1821" hit at low tide under a very different moon.  It can be calculated that the 11.2 feet of surge from the 1821 storm, if moved to the same tide and moon phase, would have been 19.2 feet.  Sandy was 13.82 feet.

Sandy was a Cat 1 storm.  It just happened to hit at a bad time and in a bad place.  Weather happens.  Look - there's real suffering going on up there - witness that stack of headlines from Drudge, and the apparently true story about out of state utility companies coming up to help restore power and being sent home if they were non-union.  I don't want to minimize that.  But using that suffering for political gain by blaming everything on "global warming" so you can extort more money out of people is just plain wrong.