The Importance of Doing Things

If you can answer "yes!" to at least one of those, you are one of the remnant that is going to rebuild things after the Coming Bad Times hit.

I started out a series here on "the least you should know" about a host of subjects a while back and painted myself into a corner.  The least you should know about electronics varies depending on what you're trying to do.  Say your SHTF radio dies: if you're trying to find and replace a single defective component, you need a lot more knowledge and tools than if you're trying to determine if you replace something like the video card or a power supply in a PC.  That knowledge and tools may not carry over to fixing a PC at all - just as knowing how to fix a PC may not help you fix that radio.

When I was 13, a friend had a portable radio that had stopped working.  Completely naive, I said I'd look at it for them and fix it if I could.  Now, I've got to tell you I had never fixed a radio in my life and I literally had no idea what I was doing.  The strange part is that I fixed it - pretty much just by observing things.  A wire from the battery holder had broken off a solder joint onto the circuit board.  I saw a solder joint with broken strands of wires sticking out of it, and a wire that looked like it matched.  So I held the wire there and the radio sprang to life.  I soldered down the wire and a junk radio was rescued.  This sort of thing is still possible, and it required no knowledge of electronics, just a willingness to look around for clues and try things.  Could I have ruined the radio that way?  Put it this way, if I did, the radio came out of the garbage for me to try to fix; how much worse could I make it?

Ever had a car not start?  At the heart of things, a gasoline internal combustion engine needs two things to run: fuel and a spark.  If the computer is messed up, the car will run really badly, but more than likely it's a matter of finding which one of those is missing and why, so you can get it going again.  If the car runs really poorly, maybe limping along still gets you where you're going.

These are both examples of the topic of field expedient repairs.  That seems to me to be the important thing to know.  And this is an enormous field in itself.  What do you do if your water pump's housing cracks and there is simply no replacement?  Can you weld it together?  Even if it fails once a year, that's better than not having one. What would you do if you found that solder joint with a handful of broken wire strands hanging out, and you had a battery wire in the other hand.  Could you solder it?

So let's start there.  Do you know how to solder? Take a look around - there's a bunch of web pages, like Instructables, that teach some aspects of soldering.  We'll talk about it in a day or two.  And start looking for a Metcal station.  I picked up one like this at a hamfest for $100, a few years ago.  I became really sold on these when I used mine to solder wires outdoors, to ground, on cool day - a task that used to tax my large soldering gun. 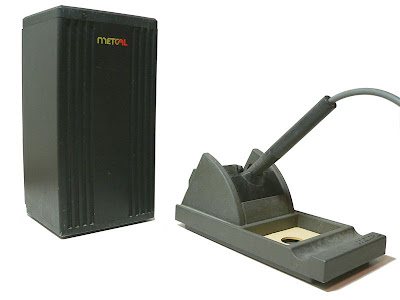