From ABC channel 7NEWS in Denver, for their 5 PM news cast, actually grabbed an image of Paula Broadwell's book that had been altered from "All In" to "All Up In My Snatch": 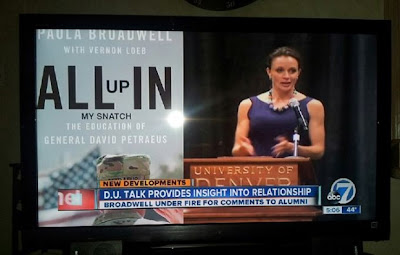 If you or I grabbed a Photoshopped image off the web and ran with it, well, we're just amateurs.  We're not real journalists, as snobby Juan Williams flung at Michelle Malkin.

Enough of that.  While I like Vanderleun's take at American Digest, I want to go in a different direction.  Go read the whole thing there - and get a look at the cast of characters who now appear to have ruined their lives.  At least the General, and Mrs. Broadwell, both of whom are married and have families that have been hurt.

Count me among those very suspicious of all of this breaking now.  I've had a slew of security clearances in the past, including the types he'd be required to have.  They don't just look at your credit report (although that's one of the first places they look); they go and interview neighbors, friends, go way back into your past, "talk with your 3rd grade teacher" and follow you around town, as the jokes go.  It seems highly unlikely that investigators like the ones I've dealt with would miss something like this.  Granted, there isn't a month that goes by that I hear of some politician doing something that makes me remark to Mrs. Graybeard "if you or I did that, they'd pull our clearances so fast our heads would be like the other end of a lawnmower pull rope". But that's after they have the clearance.

Why would the president and DOJ put a guy in charge of the CIA with an obvious security problem?  Quite simply: bargaining chip.  Should something involving the CIA come up so they need someone to sacrifice, you have him.  "You wouldn't want we should go public with this, would you?"  Petraeus had been on the ground in Libya himself and would likely be the go-to guy for what was going on there.  Getting rid of him may have been a ham-handed way to get him out of testifying in front of Congress.  He will most likely be subpoenaed anyway; several congress-critters have called for it.

The timing simply just doesn't feel right.  But America loves a sex scandal, so you know it will be on the front page.  They may - accidentally - even report some of what happened in Libya.  If they can show it somehow involved the generals and their mistresses.  Picture "Petraeus and Broadwell in Benghazi Safe House" in large type on the newspapers.

Or sleeping with a general.