No, not "look at that moron soldering".

Soldering is a big topic, and I was specifically thinking of soldering electronics assemblies.  In general, soldering is a method of joining metal pieces with a filler metal that melts at a lower temperature than the metals do.  This doesn't convey much information: many metals and techniques can fill that definition, and even worse, the terminology itself is used almost randomly.  A somewhat arbitrary divider is to refer to process that take place below about 800F as soldering or soft soldering, and processes that take place at higher temperatures as brazing.  Soldering copper pipes uses a silver-alloy solder and requires a torch to achieve the melting points, but isn't called brazing.  Jewelry uses alloys that melt fairly close to the melting point of the metals being soldered.  Silversmiths often use different grades of silver solder with different melting points; "easy" solder melts at 1240F and flows at 1325, while "hard" solder melts at 1365 and flows at 1450F.  Gold alloys will melt at higher temperatures.  Yet they refer to this as soldering, not brazing.

Electronics assemblies are usually soldered with a tin alloy, historically tin-lead, which melts at a around 365 F.  The exact temperature depends on the alloy chosen, and the most common alloys have been 60-40 or 63-37 (tin/lead percentage).  As I've talked about before, the European Union has forced electronics manufacturers to use lead free processes, and one characteristic of those alloys is that they require higher temperatures than the common tin-lead solder.  I would highly, Highly, HIGHLY (enough emphasis for you?) recommend that you solder any electronics you are going to repair with a lead-containing solder.  It should not be difficult to find surplus spools available at swap meets, ham radio conventions (hamfests) or just about any place you might get old electronics.  A small spool will last a hobbyist a lifetime.  And never, Never, NEVER use an acid core solder on electronics.  Either use a rosin-core solder, or use a separately applied flux and solder without a core.

Follow the same common sense precautions around solder as with ammunition: you don't want to handle lead alloys and things you put in your mouth.  Wash your hands after you solder, just as you wash them after shooting, reloading, or casting bullets.  Don't eat while soldering.  If you're a smoker, don't smoke while handling solder because lead residue on your hands gets an express ticket into your lungs and circulation.  You wouldn't smoke and reload, right?  The same goes for the electronics you're working on.  It probably has lead on it, too.

The most dangerous aspect of soldering is that 400 or 500 degree soldering iron tip.  I guarantee you will find it in the worst possible ways, from time to time.  Yes, I have a drawer full of those T-shirts.  I'm the only person I know who has burned their ear with a soldering iron (hey - I was 13).

Tools?  As I mentioned there are many good instructions online for how to solder, but let me point out a few things.  A soldering gun is going to be nearly worthless for electronics.  Something like this was "da bomb" when I was 13.  As electronics has shrunk, they've become essentially obsolete.
Soldering pencils, as thin profile irons are often called, are much more useful.  The cheap ones are "open loop" - no temperature control and simply run 25W or so to heat a tip.  This is OK for casual use, and maybe even building some things, but I'd recommend you don't get one unless there's no other option.  There are models with a thermostatic control like this Weller station that are very useful for most everything you'd want to do.  The advantage of the thermostatic control is that they automatically turn up the power when you need it; like soldering something to a larger piece of copper or wire that sucks the heat away.  Likewise, they don't overheat and burn the soldering tip because of the temperature control.  The tips are interchangeable, going from wider, chisel points, to tiny pointed tips for today's surface mount components.  On a power supply, for example, you may have a large component that needs a lot of power to remove, next to smaller parts.  You just change the tip for task at hand.

You will rarely splice wires and solder them together.  I did a piece on Working with Wiring some time ago, and recommended using either crimp joints or wire nuts.  I stand by that.  You might solder large copper wires together building an antenna.  Those can tax the big soldering guns.  Crimp if you can, solder if you must.  The previous owner of my boat spliced wires by just wrapping them around each other and covering in vinyl tape.  Be better than that.  I spent a day cutting those apart, stripping wire and crimping connections.

Modern electronics is small.  Got a dead thumb drive you can take apart to look at?  Soldering surface mount parts is slightly harder than the larger leaded parts.  With a leaded part, you can stuff it through holes in a Printed Wiring Board, and spread the leads a little.  That usually gave enough resistance to falling out that you could turn the board over and solder it.  Surface mount parts, in addition to being tiny, don't stick to the board.  I generally have to hold it down with a tool of some sort, usually sharp tweezers.  At home, a toothpick or X-acto knife edge will hold it while you solder one end.  Be gentle; it's easy to play tiddly winks with those parts!  (Yup, got that T-shirt, too). 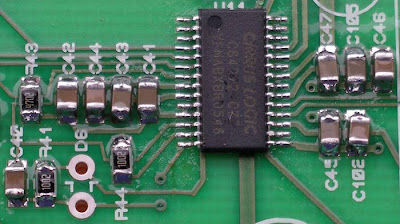 I really can't tell what size those parts are, but chances are those unmarked beige-ish components (capacitors) are no more than 0.12" long and .06" wide.  That's large by today's standards, where many resistors and capacitors are .040"x.020" - 1/3 that size.  Or smaller.

Assuming you can't get a microscope, get a decent magnifying headset, like an Optivisor.  And, yes, they really are better than the cheaper plastic ones you can find on eBay.

You never want to rely on solder for a mechanical joint, and the worst belief you can have is the old saying, "the bigger the blob the better the job".  Yeah, you can have too little solder, but it's difficult if you have a connection.  Too much isn't awful, either - most of the parts in that photo have too much solder.  Apply the tip of the iron to where the part and the PWB touch, heat both of them, and then flow enough solder onto it to fill the joint.  You're trying to create a conductive joint that will last, not create artwork.