Getting There, Though Not Very Fast

You probably never really get there.  Where?  To be as good a shooter as you'd like.

In an effort to get away from incessant phone calls, we hit the range today.  We needed to sight-in the new scope on Mrs. Graybeard's Marlin 336.  That proved to be a bit more difficult than I would have liked; we needed to put shims (provided by Marlin, so it must not be uncommon) under the rear of the short piece of Picatinny rail we added to mount the scope.

It was a pretty typical day for this time of year; 59 at dawn and 80-ish for the high.  Winds variable, but not over 10.  At 25 yards, getting the scope aligned, it didn't matter much.  I took this shot of a target at 25 that Mrs. Graybeard practiced on, once the scope was set.  The blurry photo is due to shooting through my piece 'o crap spotting scope. 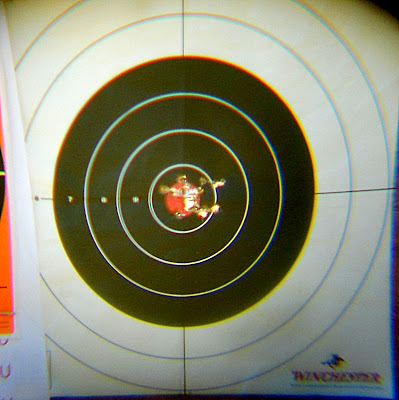 And here's what she did with a 10/22 from the same distance: 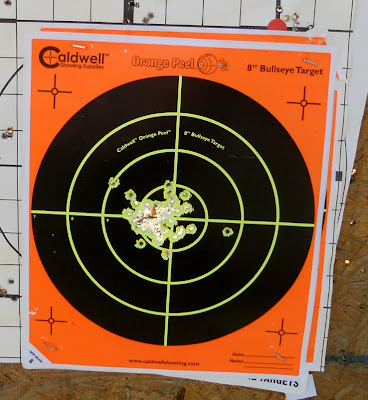 To be honest, the group spread out because as the paper and backing were eliminated, it was hard to figure out where she was hitting.  While she was plinking on that target, I put my AR on a target at 200 yards. That's next: 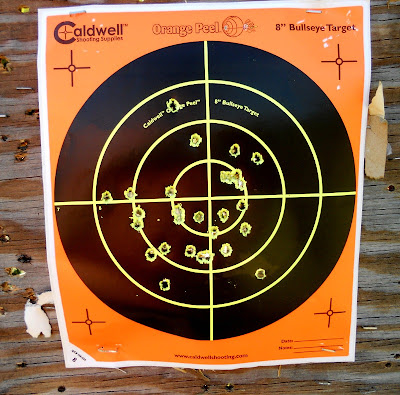 The crosswind matters for a long time of flight and spread things out a bit.  This target is one magazine full of 30 rounds.  Everything easily within a 6" diameter circle at 200 yards; 2 MOA is 4 inches diameter out there.  Take away a few flyers and it is that 4" diameter. This is with plain old bulk .223 ammo (this stuff), not my reloads.  I'm okay with this.  For now.  I know there are folks who shoot 600 yards with iron sights.  My eyes are not that good.

I've written many times about our trips to the range, and our journeys toward being competent with both long guns and handguns.  I haven't been shy about how bad I suck.  Our first time shooting at 200 yards, I felt lucky to hit the target, and that was a 12" circle, not one of these 8" targets.  We used every inch of that 12" target, too.