Just What Are They Regulating, Anyway?

On July 21, 2010, the president signed into law the Dodd-Frank Wall Street Reform and Consumer Protection Act, usually just referred to as Dodd-Frank, after these two clowns, I mean, respectable former statesmen. 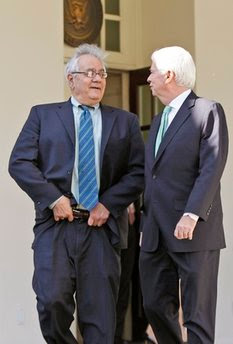 Although it's not completely clear what effects it will have - the regulations that it requires haven't been fully implemented, or (as I've heard) haven't even all been written yet - we are beginning to see some of its effects.  This week, John Stossel reports that the Federal Government sued to stop Intrade, the innovative prediction company, for being an illegal "commodity options seller".  Intrade responded by closing access to US-based account holders and telling them to get out.


"We are sorry to announce that due to legal and regulatory pressures, Intrade can no longer allow U.S. residents to participate in our real-money prediction markets," the company said in a statement Monday evening.

Intrade said it is "strongly" urging U.S. residents to "immediately" start to close down their accounts. The company said U.S. investors must close out all open predictions before 3 a.m. ET on December 23.

If U.S. residents don't close out their positions before the deadline, Intrade said it will do so at what the company deems fair value as of the daily session close that day.

Not familiar with Intrade?  Intrade, (who echoes Flounder in Animal House by saying "Nothing is Over Until We Decide It is"), is a company based in Dublin, Ireland operating on a model developed by DARPA.  The model is that investors betting real money on various future outcomes will be better predictors of future events than pundits, and other "experts".  Account holders literally bet on future events, such as elections, the US going to war with Iran (Before Dec. 31, 2013 - 35% at the moment) or that Any Country Using the Euro will drop it Before Dec. 31, 2013 - 34.1% at the moment,


In English: the government says that many of the things Intrade allows people to predict - everything from what the price of gold will be in the future to whether the U.S. will go to war soon - are legally considered "commodity options," and that Intrade broke the law because it isn't licensed to trade those. The penalty is $140,000 per violation.

In a press release, the CFTC's chief enforcer went out of his way to target "prediction markets":

"It is against the law to solicit U.S. persons to buy and sell commodity options, even if they are called ‘prediction' contracts, unless they are... traded on a CFTC-registered exchange... Today's action should make it clear that we will intervene in the ‘prediction' markets, wherever they may be based."

Why doesn't Intrade just get a license to be an exchange?  They tried and the government won't give it to them!  Similarly, when a large, established American company applied to get into that market, the fed.gov refused them, too.  Stossel, again:


The pompous CFTC enforcer claims that the regulation "is important for a number of reasons, including that it enables the CFTC to police market activity."

Please. These regulations don't help police market activity. When people make money on Intrade, Intrade sends them the money. There are no allegations of fraud. Customers are happy with Intrade, judging by increased activity on the site (over $50 million was bet about whether Obama or Romney would win.)

So while Dodd-Frank may have nothing to do with preventing the coming derivatives apocalypse, we can see that they're hard at work stopping less threatening markets. Sorta like their weird raw milk fetish.