On the Red/Blue Map and Where We Go From Here.

By now, I'm going to assume everyone has seen this map of the red/blue distribution in the last election. 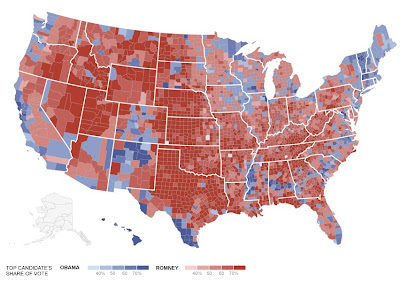 I find some surprising pieces here.  New Hampshire more blue than Connecticut?  "Live Free or Die"?  Not so much.  Most of the map shows the overall tendency for blue counties to be the big populations, as I wrote about last year, but upstate New York, Minnesota, and western Mass?  Pretty low population density, I think.  I assume that swath through the Carolinas into Mississippi is the old cotton belt - very poor families on all sorts of assistance.  Montana and Texas are scary, and South Dakota is bluer than I expected.  Look at how the pushing of the FSA from Mexico into southern Texas is turning it blue.  How much longer do they have as a sane place?

Someone, I think Victor Davis Hanson, was saying the Democrats have successfully put together a coalition of the bottom 47% and the uber rich.  Look at California, on the sea side of the fault line;. These are the Mark Zuckerbergs and other techno-millionaires and billionaires.  The Republicans have become just the middle class, say $50k up to $200k per year, and small business owners who are constantly in the vise.  Maybe call it a turnip press after the old "you can't get blood out of a turnip".

Another thing that strikes me is just how similar the map is to the one from the in 2004 I posted last year.  I think we've all pondered that between the two sides, north of 2 billion dollars was spent on this campaign "season", and yet the balance of power is exactly the same as it was two years ago.  The exact number of seats may be different (I honestly haven't checked) but 2 Billion Dollars for changes along the margins.

As for what direction Obama will take, expect the maximum thuggery you can get.  Socialism for the masses, private accumulation of as much plunder as they can get.  Expect cap and trade.  The now-defunct Chicago Climate Exchange trading house was designed to get as big a piece of that multi-trillion dollar action into as many friends' pockets as possible.  I expect the same racket in a different building.  Obamacare can not and will not be stopped - the system designed from the ground up to fail and force us into a single-payer NHS.  Destruction of their voters?  They can just blame it on the Republicans, just like Democrats successfully blamed it on them when they had full majorities in both houses.  Destruction of the country?  Who cares?

On The Secession Movement

Of course, we've all seen the stories about the states requesting to secede.  Clearly this is about as official and meaningful as that email from a Nigerian bank.  Seems like it's just a way to get on the White House enemies list (or Predator kill list).  And it raises the questions of whether any state could survive on its own.  Texas is something like the 15th largest economy in the world - could they put up a defense industry that could stand the Northern Aggression they'd get this time around?  Could there be an amicable separation?  Take away the spending addicts money?  Can you amicably take away a heroin addict's supply?

Like it or not, we all ride this glider into the dirt.  Or the cliff.

Speaking of which, did you see that Putin says Obama is coming over to see him?  I assume we'll get to see the flexibility he famously promised Medvedev about.  Our nuclear arsenal down to zero?  He has said that should be a goal.

The Dragon's Teeth Have Been Sown


I don't see the wheel turning for 10 or 12 years, but when it does it will be an outraged and vengeful Millennial demographic, likely libertarian with no care whatsoever for social issues, that will be dragging all of our asses, Democrat and Republican alike, off to be shot.

As we sow the dragon's teeth, so shall we reap. All of us. I'm surprised my children even consider me a human being at this point.

Maybe not so much libertarian as the 2022 incarnation of Occupy Whatever, but that's quibbling over flourishes when the melody is right.