A Different Kind of Project

The projects I've written about here have tended to be kind of techy - whether it's my little solar panel plaything or my AR-15.  This is a different kind, rather low tech in comparison.  No electronics at all.  No soldering.  No machining (probably).

I'm making a couple of fishing rods.  Took off Friday for a trip over to a great store that sells everything you need for rod making, Mud-Hole in Oviedo (between Orlando and Sanford).  (No financial affiliation, yada, yada.  I was just really pleased with the service and selection).

I'm not new at this, but like everything else in fishing, it has changed a lot in the 30+ years since I fished regularly.  When I was in my early 20s, and fishing from piers and jetties, I would look at the custom rods in the tackle shops and drool.  Surely all that fancy work had to make a better rod, right?  But on a part-time work/part-time student budget, over a hundred bucks for a custom rod was big money.  So I got a book and learned to do it myself.  Now, in those days, custom rods tended to have a "diamond wrap", a pattern formed by winding thread up and down the blank above the handle.  It was the sign of a custom rod because no factory would spend that much time and effort to do it. Today, some custom rod builders actually weave patterns in the thread 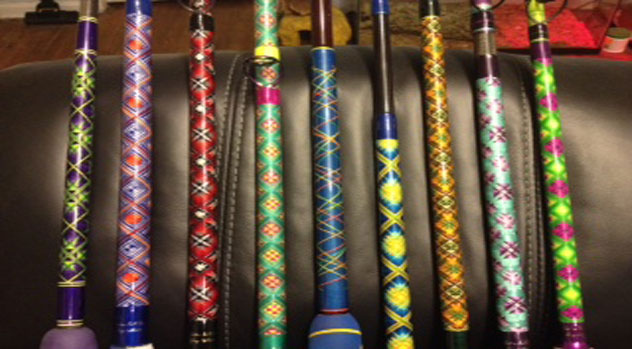 Joey's custom rods, just somedood I found online.  Not mine.  This is the kind of custom thread work guys are doing today.

Rod making requires virtually no tools except the thread that holds the guides in place.  Add in some glue (usually epoxy), masking tape, a finish (again, usually a clear liquid epoxy), and an Exacto knife or scalpel.  There are some times and places where a little motorization helps, and many makers use a sewing machine motor.  The finishes we use tend to be runny and need to be slowly turned to keep them from looking bad.  I have an ancient barbecue rotisserie motor.  I wound several rods using nothing more than my lap, and wrapped the thread around the pages of the phone book to add tension.  This isn't rocket surgery.

I still have and fish with the first rod I ever built from purchased parts - right around 1974 or '75, if I recall.  I re-did the diamond wrap around the bottom of the rod a couple of times, with the current build going back to about 1979 or 80.  Being just about 40 years old, the guides were starting to show signs it was time to rebuild the rod.  A spinning rod I built in the early '80s had two guides that actually came apart when I took it out a couple of years ago; the older rod apparently had better guides.

And I'm building a custom for Mrs. Graybeard that will be beautiful.  Since it has been many years since I've done this, I'm doing mine first as a sort-of sacrificial project.  Better to make my mistakes on this one than the next.  I took the old rod apart today.  Sawed the reel seat in half with a cutoff wheel in a Dremel and pried it off.  Removed all the guides.  Started the process of rebuilding from a bare blank.  I'll update as I go along.