"I Could Have Been Trayvon"

Yes.  Yes you could have, Mr. President.  Because you don't have any real character.  Certainly not enough to be one of these guys. 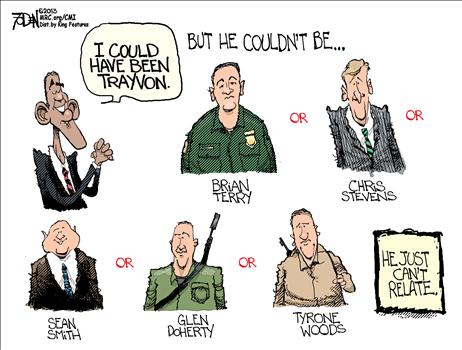 You don't have the character of George Zimmerman, the man you so desperately want us to despise, who came out of hiding long enough to rescue a family, (audio warning) but in doing so, revealed where he's living.  (GZ needs to find a really anonymous equivalent of the witness protection program, and learn how to disappear.)

Hell, Mr. President, you don't have the character to pay your respects when a genuine hero like Chris Kyle gets murdered, but you'll practically make it a state ceremony when a drug-addled twit dies of an overdose.  Or let a two-bit, wannabe thug try to make his bones playing the knockout game, try to kill the guy when he fails and then fail at that, and you're on it like Oprah on baked ham.