Yeah, you know how my taste in movies runs to comic book/sci-fi/juvenile stuff, so we had to go see Pacific Rim.  I think the quote I heard that sealed the deal was,

At the risk of introducing too much plot to get in the way of the monster bitch-slapping, in the near future humanity comes under attack by a succession of monsters called kaiju coming through a dimensional warp under the pacific.  After several come through in succession, and millions of people die before the monsters can be killed, humans develop monster robots called jaegers (hunters) that are controlled by the mind and movements of the operators.  After they find the load on the brain is too much for one person, the robots become controlled by pairs of operators who have to have their minds linked, so that every thought goes through both minds. Total mind meld.  There: I've caught you up to the first two minutes of movie. 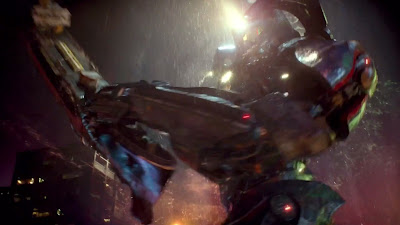 Robot "Gipsy" getting ready to put the beating on a kaiju with a cargo ship. (source)  Two hours of escapist bliss ... with out one single mention of the names BHO, TM or GZ.

If you like escapist, action, sci-fi flicks, check it out.  If you like that, chances are I had you with the quote.

Posted by SiGraybeard at 6:25 PM