Sometimes you come across stories that are just so breathtakingly stupid, you have to pass them on.  According to ARS Technica,


The Economic Development Administration (EDA) is an agency in the Department of Commerce that promotes economic development in regions of the US suffering slow growth, low employment, and other economic problems. In December 2011, the Department of Homeland Security notified both the EDA and the National Oceanic and Atmospheric Administration (NOAA) that there was a possible malware infection within the two agencies' systems.

The NOAA isolated and cleaned up the problem within a few weeks.
....
EDA's CIO, fearing that the agency was under attack from a nation-state, insisted instead on a policy of physical destruction. The EDA destroyed not only (uninfected) desktop computers but also printers, cameras, keyboards, and even mice. The destruction only stopped—sparing $3 million of equipment—because the agency had run out of money to pay for destroying the hardware.


...$823,000 went to the security contractor for its investigation and advice, $1,061,000 for the acquisition of temporary infrastructure (requisitioned from the Census Bureau), $4,300 to destroy $170,500 in IT equipment, and $688,000 paid to contractors to assist in development of a long-term response. Full recovery took close to a year. 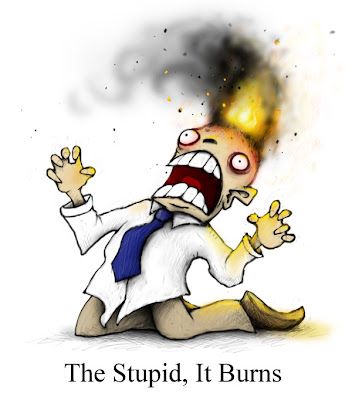 Remember, the fed.gov insect overlords are our philosopher kings.  They're simply our betters in every way.

Of course, since they're an agency "that promotes economic development in regions of the US suffering slow growth, low employment, and other economic problems." which is to say the blue states, it's always possible they were using the infection as an excuse to destroy evidence of something they wouldn't want widely known...