Robert Stacy McCain ("The Other McCain") writes in American Spectator about an aspect of this story that hasn't gotten attention.  You may not know this, but Trayvon Martin was not from Sanford (a suburb of Orlando), where he died; he was from Miami Gardens, a suburb of Miami about 200 miles south of there (and very coincidentally, where I grew from 5th grade through graduating high school).


Trayvon Martin was not from Sanford, the town north of Orlando where he was shot in 2012 and where a jury acquitted Zimmerman of murder charges Saturday. Martin was from Miami Gardens, more than 200 miles away, and had come to Sanford to stay with his father’s girlfriend Brandy Green at her home in the townhouse community where Zimmerman was in charge of the neighborhood watch. Trayvon was staying with Green after he had been suspended for the second time in six months from Krop High School in Miami-Dade County, where both his father, Tracy Martin, and mother, Sybrina Fulton, lived.

Who cares?  Internal investigations have revealed the reason young Martin was not incarcerated for crimes he committed, and was simply suspended, is that a police chief was under-reporting crimes so that his statistics looked better.  The police chief later resigned amid scandal.


Both of Trayvon’s suspensions during his junior year at Krop High involved crimes that could have led to his prosecution as a juvenile offender. However, Chief Charles Hurley of the Miami-Dade School Police Department (MDSPD) in 2010 had implemented a policy that reduced the number of criminal reports, manipulating statistics to create the appearance of a reduction in crime within the school system. Less than two weeks before Martin’s death, the school system commended Chief Hurley for “decreasing school-related juvenile delinquency by an impressive 60 percent for the last six months of 2011.” What was actually happening was that crimes were not being reported as crimes, but instead treated as disciplinary infractions.

Trayvon's crimes weren't discipline problems, like skipping school or being late; he was found in possession of stolen goods and "burglary tools" one time.  A little time in "juve-y hall" might have done him some good.  Isn't it ironic that if the police had done their job and put Trayvon in detention, he would not have been in Sanford?  The fatal encounter could not have happened. 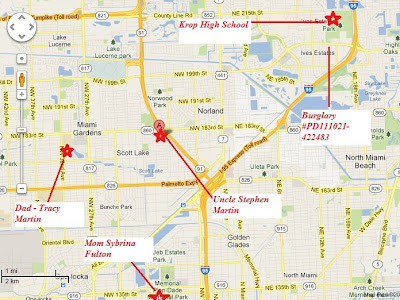 In a very real sense, through inaction, the Miami-Dade School Police Department and Chief Hurley killed Trayvon Martin, in two ways.  By suspending him instead of incarcerating him they encouraged him (memo to school officers: being suspended from school is more like a reward to these kids, not punishment) and enabled the trip to Sanford.  By not punishing him for crimes they rewarded him there, too, and taught him that he can be a successful thug.