I Need Some Kitty Downers And I Need Them Fast

Back in the really old days - Season 2 of Saturday Night Live, they did a skit on drugs for dogs: Puppy Uppers and Doggie Downers.  Well I need some kitty downers and I need them fast. 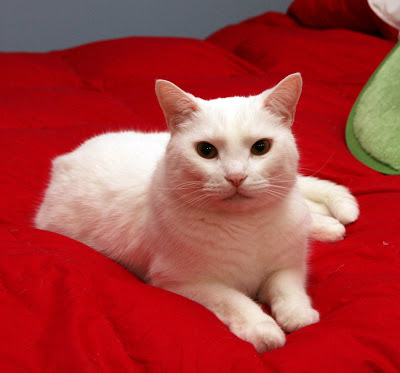 I've written about Mojo before.  Moe is just a lot of fun; he's very interactive - chats with us, and genuinely wants to be around us.  Unlike any other cat I've known, if you hold your hand down, he'll stand on his hind legs to rub against your hand, basically standing up and launching his head into your hand.  He'll sit in uncomfortable places to be close to both of us.  He likes for us to talk with him.  He has rituals we have to follow at times, like before and after work.  And if we're both not in our places, he'll sit and expectantly wait for the second one to join in.  When I get out of bed on most mornings, within seconds of my standing up he has flopped down next to her to get his tummy petted.  Lately, he has to lie down in the bed between us to be petted when we turn in for the night.  He could literally be petted every waking minute, I think. 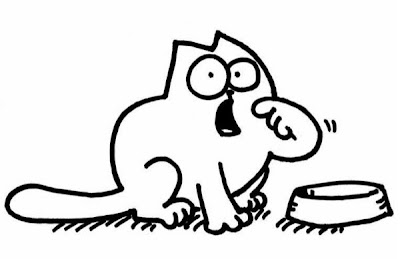 (Simon's Cat uses this sign language to say "feed me".  Moe has his own approach.)

The problem is, he'll wake up during the night and decide he needs attention.  This morning I was disturbed from a deep, deep sleep by him sitting on my pillow and licking my head.  I held up my hands (still asleep) and he nipped at my fingers - his usual "sign language" for "feed me, servant!".  I looked at the clock and saw it said 25.  In my haze of waking, brain said, "25?  That's not a time.".  I concentrated hard and looked again.  It was 2:51.  To shorten the story somewhat, I didn't get much sleep after that.  Running on empty.

So I figure if I can get him some kitty downers, and I can get him to sleep through the night, I'll be better.  I tried catnip - the booze equivalent - that didn't work, so I need real kitty sleeping pills. Ever heard of a cat that won't sleep enough?  They say the average house cat sleeps 13-16 hours a day.  That would be fine if I could get him to sleep all night.  Lacking that, I'll take some of whatever the anesthesiologist gave me last time I was out.  For me, not him.