Just In Case It Matters

Just a few random thoughts that ran through my head this morning, centered on what has gone on in the two families of the Martin/Zimmerman trial in the 18 months or so since that fateful encounter.  I really think this can come down to a very simple question, posted at the end.

Everyone has reported on the incident where Zimmerman went to the rescue of a family that rolled their SUV.  The rescued family is now hiding, as best as they can, afraid they'll be attacked by someone in the groups of terrorists threatening everyone involved in the trial.

A few months ago the Martin family filed to trademark their son Trayvon's name.  Presumably due to restrictions on trademarking a proper name, they filed two trademark forms, one for "I am Trayvon" and "Justice for Trayvon".  Trademark isn't granted yet, so no need for the (tm) sign.

I saw an argument that they're trademarking those to keep someone else from trademarking them and making money off Trayvon's name.  Now maybe it's just me, but I don't think I'd care if someone else made that money.  I'm sure they see it differently, but I don't see where it's any skin off my back if someone else figures out a way to make some money of it, and there's always the chance they end up sending boxes full of "Justice for Trayvon" shirts to Africa.

A few weeks ago the Martins settled their lawsuit with the Homeowner's Association of the neighborhood where he died, reportedly for over a million dollars?  Considering Zimmerman wasn't on duty for the Neighborhood Watch association that night, just a guy on the way to the store, I can't help but wonder exactly why they sued, except that they can.  They don't have any legal expenses in the recently completed trial; that was paid for by the State.   They get flown all around the country to appear on TV shows, but they don't pay out of pocket, the shows do.  To be coarse, you can buy a hell of a lot of funerals for a million bucks.  It's an American phenomenon that if your family member dies of cancer, or a heart attack or stroke - too bad, so sad - but if they die for any other reason, by God, there's money to be made (and people are trying to come with ways to sue over bunches of diseases, too).  It's an American sickness, and the Martins have it, too.

By the way, anyone want to apply for a trademark on this? 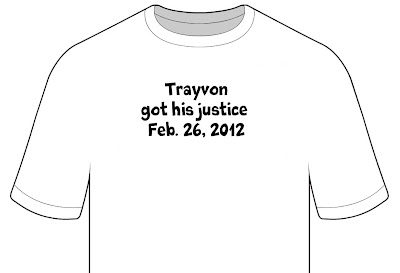 So I have a simple question:  given all this who would you rather have as next door neighbors, the Zimmermans or the Martins?

Posted by SiGraybeard at 1:57 PM