So Janet Incompetano is going to leave her position of uber fuhrer of the DHS to be the president of the California state university system.  This is just up her alley.  It's a position almost as useless as the job she's in with less scrutiny, less oversight and the same requirements for ability to, you know, actually "do useful work". 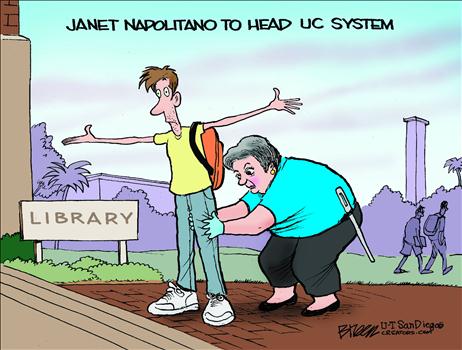 I'd love to put a "Janet's Greatest Hits" list here, but I'm sure I'll miss some.

My all time favorite was the underwear bomber, Christmas of 2009, when she famously said, "the system worked" - in the sense that it didn't work at all, and there are only two reasons that plane didn't blow up: (1) the Tango was stupid and didn't get the explosives right to make a big bang (although he did immolate his "wedding tackle") and (2) the passengers grabbed him and beat him.

She was responsible for the attack on anyone with conservative or libertarian views as terrorists.  The DHS released the famous "Rightwing Extremism: Current Economic and Political Climate Fueling Resurgence in Radicalization and Recruitment" document number IA-0257-09.  (pdf warning)  A document that reads like an 8th grader put it together in a few minutes before bed for class the next day.

She's responsible for the stupid euphemism "man-caused disasters".  She said crossing the border illegally "isn't a crime per se".

I could go on, but I won't.  Let's just say goodbye, Janet.  Don't waste any time moving on now.  Don't let the door hit you on the way out.  There remains a chance, however slim, that they'll appoint someone who actually knows something.