Although there isn't a rider or team we particularly care about, and the sport as a whole has suffered from the continual destruction of its past heroes for doping, the lovely Litespeed-riding Mrs. Graybeard and I have followed much of the Tour de France this year, the 100th Anniversary. The tour concludes tomorrow, but today saw its last real fighting stage with a brutal mountain climb up Annecy-Semnoz in the Alps.  Mountain climbs in the tour are rated with an algorithm that factors the percentage grade, length and altitudes.  "Easy" climbs are Cat 4, going to Cat 1, but today's stage and the legendary mountains of the tour - Alpe D'Huez, Ventoux, and many others - are HC, the French abbreviation for "Beyond Categorization" - too hard to categorize.

Twenty years ago, when I switched from jogging to cycling to save my knees, I ran across a saying on the internet cycling forums: TIOOYK - There Is Only One, You Know - and it's true, there's just no other sporting event that's like grand tours in general, and the TdF is the big one. There is just nothing else in sport with majesty, color and spectacle of the Tour.  Not to mention the raw athleticism.  Get a group of boys playing together on bikes and you can guarantee that they'll eventually race to see who's fastest.  You want to race?  Fine, let's race up that mountain most people can't even stand up straight on.

Cycling is the only sport where competitors from different teams have to cooperate to win.  The physics of riding in a group is that the inner riders, sheltered from direct air drag by the outside, can reduce their power output by 20% to as much as half in a really big peloton (the term for the big group, the platoon, of cyclists).  A breakaway of a single rider can rarely win, but manages to do so once or twice per Tour.  A group of perhaps 6 to 10 can give each other enough advantage to hold off the rest, on the "easy" flat stages of the race.  When the finish line nears, though, the cooperation turns back into a race, with guys trying to stay in second or third to get enough shelter from the wind to make a break for it. 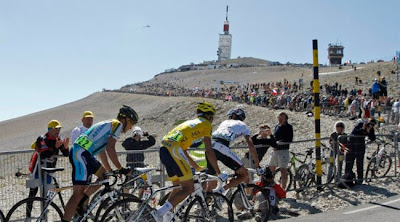 (source)
As an example of a small group taking turns pulling into the wind to help each other, here's a scene from this year's tour, racing to the summit of Mt. Ventoux, "The Monster of Provence", on last Sunday's stage.  Chris Froome of the UK is in the leader's yellow jersey, and young Colombian cyclist Nairo Quintana in white - Quintana won today's stage.  In this stage, Froome broke away from Quintana with about a km or so to go and won easily on the epic mountain.  The tour wraps up tomorrow with the essentially ceremonial ride into Paris and along the Champs-Elysee.  Barring a meteor strike on his team bus or something equally odd, Chris Froome will win the Tour overall, with Nairo Quintana winning the best new rider's white jersey and second place on the podium (probably along with a fat new contract!)   It's a gentleman's agreement that the only real competition tomorrow will be the final sprint on the Champs, and the three podium positions will go unchallenged.  Usually.