Forensic Labs Are Corrupt, Too

A chemist for the state of Massachusetts, Annie Dookhan, pleaded guilty on Friday to falsifying tens of thousands of drug arrest investigations.  WBUR has collected its stories on Dookhan into a website called Bad Chemistry, an investigation which they say calls into doubt 40,323 cases she was personally involved in and 190,000 cases the lab worked on.  The lab is now closed.


"The ripple effects of the potentially bogus testing are staggering for the criminal justice system and for the defendants. As authorities review the cases involved, they're also considering cases where defendants received stiffer sentences because of previous offenses. Or cases where defendants risked or lost jobs, public housing, custody of their children, or deportation.

"District attorneys have set up 'war rooms' in their offices just so staffers can research and match the cases in which Dookhan tested the drug evidence. They've hired retired judges to preside over to review each case and decide whether to release those incarcerated and/or hold new trials."

But, of course, it doesn't end there.  Gina Luttrell at Townhall takes up the story:


According to the Boston Globe, state police also fired a drug analyst from the same lab for allegedly falsely claiming in court that she possessed a Bachelor’s in chemistry.

The corruption does not seem to have stayed within the lab. When Dookhan was convicted, her emails revealed close ties to prosecutors in the state, including Norfolk Assistant ­District Attorney George ­Papachristos, who resigned when the emails were released revealing a “flirtatious” friendship. ... One email chain suggests that prosecutors in touch with Dookhan knew they were getting falsified results but pressed forward anyway
....
Research shows that the problem reaches far beyond a few states. According to a study published last year in Criminal Justice Ethics, the American system by and large perverts the incentives of the people working in it, such that everyone, from police, to prosecutors, and, apparently, even the lab scientists, are more motivated to get a guilty verdict rather than to ascertain real guilt or innocence.

This is a short ways from a story I've covered before: civil forfeiture, in which police legally steal money from people under the argument that anyone carrying that much cash must be involved with drugs.  That's not from a conviction by jury, but simply by seizing assets in a traffic stop or at an arrest.  Nationally, several police departments and prosecutors' offices brag about cars and boats they got this way.  But it's not just civil forfeiture on steroids and it's not just Massachusetts; only eight states have laws that bar the use of forfeiture proceeds for the benefit of the seizing police department, and of the other 42 states, 16 give at least 50 percent of seized assets to law enforcement, and in 26 states, it is 100 percent.  By creating a system which rewards its police for seizing property and that funds state crime labs by convictions, is it really such a wonder that someone like Annie Dookhan would do what she did to ensure that her lab got as many convictions as possible?


When Dookhan pleaded guilty, Attorney General Martha Coakley said, “Certainly one of the victims in this case, and the actions of Annie Dookhan, is the public trust.” Indeed, the public’s trust has been broken, but not by Dookhan herself. Rather, it has been soiled by the criminal “justice” system that aligns everything in such a way that the most rational thing for Dookhan to do her own self interest was to put innocent people behind bars. 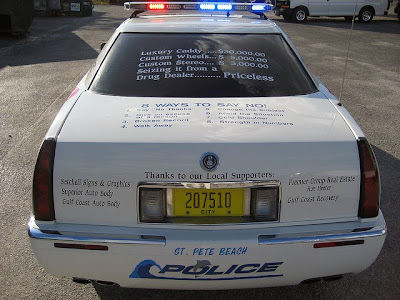 St. Petersburg (Florida) police getting a little too cute with a seized car...(source)