In the last week, a couple of car makers have announced they'll be offering hydrogen powered cars, with Hyundai's hydrogen fuel cell (i.e., electric powered) Tucson SUV to be offered in February - about 6 weeks from now.  There's a catch - it will only be offered for lease in the Los Angeles area.


Hyundai said the Tucson Fuel Cell will be capable of refueling in under 10 minutes and will offer instantaneous electric motor torque of 221 lb-ft. The company added that it logged 10 million test miles on its fuel cells since 2000.

To me, this last paragraph underlines the experimental nature of the car and system.  They're only going to lease them, in case they need to recall them all for shredding, and they're going to make the fuel free to help keep tabs on the use of the cars.  I'll bet they require some number of maintenance visits so they can monitor how the systems age in general use.

This isn't a first, though. I know that GM actually previewed a hydrogen powered SUV in New York City area a few years ago - again because it was one of the few places in the US with hydrogen availability - and was touting this hydrogen fuel cell powered SUV in 2006.


The Tucson-badged model uses the same in-house-developed fuel-cell stack, lithium-polymer battery, and hydrogen tank capable of carrying 12.3 pounds of the gas as does its Euro-market counterpart. It also delivers the same 134 horsepower and 221 lb-ft of torque by means of the same electric motor.

The Tucson Fuel Cell’s hydrogen tank and lithium-polymer battery gobble underbody space, so there is less room for passengers and cargo when compared to standard U.S.-spec Tucsons. So while overall length actually increases by 0.4 inch, second-row legroom diminishes by 0.6 inch, and cargo capacity drops by 1.9 cubic feet.

Honda has announced its own hydrogen fuel cell car will be hitting dealers in 2015.  While the Hyundai is (forgive me) pedestrian in its appearance, the Honda is more "daring"; a sleek concept car. 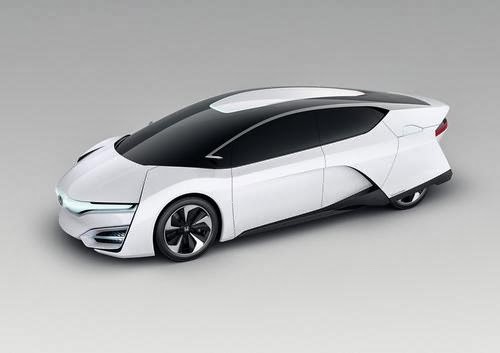 The problem here is obviously the fuel infrastructure.  Hydrogen is the most abundant element in the universe (well, except maybe for stupidity) but it's also the smallest molecule in the universe.  Hydrogen leaks out of systems very easily.  It's found in natural gas deposits, and can be produced from natural gas, or it can be made by distillation using any source of waste heat.  We just don't have an established system for storing and distributing hydrogen.  Hydrogen powered vehicles don't need a pressurized gas tank, full of gaseous hydrogen, it can be stored as a metal hydride.

I've always been somewhat of a fan of hydrogen for power use, though not a "fan boy" like some of these sites.  Unlike the majority of alternate energy systems, you could run your car on Hydrogen instead of gasoline right now, with minimal changes.  You'd need a different fuel system, and that's the major difference.  The electronic controls, if you have any, would need to be tweaked, and timing advanced, but that's pretty easy.  There's really no particular reason to go for fuel cell based electric cars.  Hydrogen can be burned like any other flammable gas.  The reason for the fuel cell/battery approach is probably to gather good will from the greenies.