Iceland Can Teach the US About Our Own Constitution

It received very little press in the US, but in response to their involvement in the '08 economic crash, the people of Iceland took to the streets with pots and pans and overthrew their government.


Can you imagine participating in a protest outside the White House and forcing the entire U.S. government to resign? Can you imagine a group of randomly chosen private citizens rewriting the U.S. constitution to include measures banning corporate fraud? It seems incomprehensible in the U.S., but Icelanders did just that.  Icelanders forced their entire government to resign after a banking fraud scandal, overthrowing the ruling party and creating a citizen’s group tasked with writing a new constitution that offered a solution to prevent corporate greed from destroying the country. The constitution of Iceland was scrapped and is being rewritten by private citizens; using a crowd-sourcing technique via social media channels such as Facebook and Twitter. 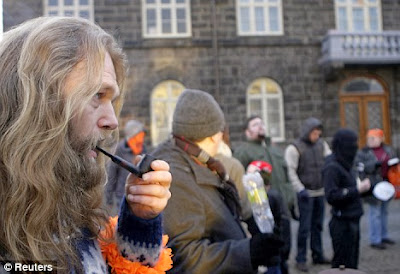 (Image source) In Iceland, the protesters look like Gandalf.

The time could be coming.  I don't know if you've seen the story, but South Carolina and Virginia have formally called for an Article V Convention of State (COS), and Florida is expected to lend its support to the cause. Article V, of course, is "a mechanism put in place by the founders to enforce a checks-and-balances system for the federal and state governments. While amendments to the Constitution can be proposed and passed in Congress, Article V also allows for the states themselves to propose amendments. If two-thirds of the states submit an application to Congress, Congress must then call a Convention of States to propose amendments to the Constitution."

I've always been afraid of an article V convention, thinking it was going to be a Constitutional Convention or Con Con.  Matt Bracken paints the Con Con in the way I always feared it would go in his EFAD series: just who's going to show up at this sort of convention?  The professional astroturf protesters from SEIU, Occupy Whatever, Organizing for America, and every other leftist or communist group you can shake a stick at.  Right wing people work for a living and can't take off six months to be there  But a convention of the states is not a Constitutional Convention and it doesn't have to go there.  Quoting from the Aiken (SC) Standard:


“Washington will never limit its own power,” Taylor said. “They'll never pass amendments to balance the budget, put term limits on themselves or give the states their rightful Constitutional authority.”

Bob Menges, a Constitutional law professor, is also the state director for the COS Project in South Carolina. Like Taylor, he also feels the convention is necessary.

And switching to Glenn Beck's take:


“Constitutional Convention scares the crap out of me because it opens everything else up, however, that’s only if the states are out-of-control. And there are a lot of people now fighting it on the conservative side… I believe this is the only way back. There’s a massive reset coming, and the Constitutional Convention is the way [the founders imagined] it.”