Despite the unseasonal heat, over 85 by noon, Mrs. Graybeard and I hit the gun range today along with a friend.  Not just idle shooting, not that there's anything wrong with that, but to sight in Mrs. Graybeard's 10/22 Takedown and the friend's hunting rifle in 7mm Remington Magnum.  And to test out a modification I made to my Remington 700 .30-06 (a 1984 model I picked up in 2010).

About a month ago, I was ordering something from the candy store, and was just short of the "free shipping" threshold.  So looking around, I stumbled across the Kwik Klip conversion kits to turn the 700 from the internal box magazine to a detachable magazine.  A little crazy, I'll grant that, but why not?  It turns out the installation was so easy it almost fell in place by itself, and I thought I'd try it out to make sure everything runs smoothly.  Excellent! 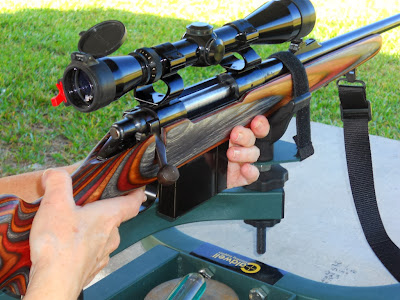 Ran the four round magazine it comes with at 25 yards, just to remember the rifle, then loaded six into the 10 round magazine and moved out to 100 yards.  According to the Winchester Ballistics app I run on my phone, the rounds I was using should rise another 2.6 inches on the way to 100 yards, so I aimed about that low and they behaved just as predicted.  Those are the diminutive but deadly Mrs. Graybeard's hands setting up a shot on the Lead Sled, not mine, and she got the same results.   Everything fed just fine (of course it's still a bolt action rifle, duh!, but magazines can barf up and I wanted to check it out with the gun warm from shooting).

The other reason she and I needed to go was to check her Ruger 10/22 Takedown.  We've been having some issues with this gun and it just seems that the Takedown doesn't go back together accurately enough.  She was off at 25 yards by several inches, so it would be off the paper at 100 yards and unusable for real shooting at any distance.  We set it to zero, then went to break the rifle down.  Oops - the fold down front sight was jamming on the scope's front bell and preventing the take down!  The simple act of undoing the latching mechanism, twisting just a few degrees like that and then returning everything where it was put it off target again.  Here's the kicker: we replaced the first (Tasco) scope with that new one (BSA) because of similar issues we thought were from that scope.  We're down to one of two things: either leave it as a plain old 10/22 - never take it down again, in which case it's expensive for a stainless 10/22 - or talk with Ruger and try to figure out what's going on.  I've heard some talk about them going back together a couple of minutes of arc off, but that's all within the center 1" ring of the targets. If it's off 3", that's more like 12 minutes, and I think that's the kind of error we're seeing.

We also helped a good friend zero his Savage hunting rifle in 7mm Remington Magnum.  I've never shot that caliber before, but it seems pretty good.  According to that Winchester ballistics app, it shoots a 175 grain bullet faster than a 150 grain .30-06 by a few fps, but I'm sure the higher velocity and heavier bullet gives it higher impact energy.  His rifle was off zero, which he found on an annual hunting trip to Montana in October.  I think we straightened that out.

I know that the folks under an inch of ice in the Northeast aren't going to like to hear me complaining about it being 85, but seriously, I can use a break for some cool weather.  It has been under 50 twice this fall/winter and maybe under 60 one week total since last March.  It can be hot all year around here, and I can use the few weeks we might get every year to cool off a bit.  To be honest, the only people I know who don't like it to cool off now and then, and especially around Christmas, are the transplanted northerners who came here to get out of the cold.