A while back (2012) we had a good discussion about Hybrid Cars, Batteries and drive train options.  The comments add a lot to the story and a couple of comments mentioned that in many industrial systems, an internal combustion engine (ICE) is used at its best - to run a generator - and the electric motor is used at its best - to deliver lots of torque.  Zendo Deb brings the smart (as she always does) about several aspects.  Worth your time to read.  In particular:


Most cruise ships today, as well as a lot tug boats, ice breakers, military vessels and the like, use gas turbines (jet engines) to generate electricity. They use the exhaust to generate steam and more electricity. And they use the electricity to run everything - including the motive power to the boat. Trains have been diesel-electric since the 50s. You run the ICE or the turbine at high-constant speed, you use electric power to maximum torque at minimum RPM, and everyone is happy....

(and she goes on to discuss the liquid sulfur batteries big locomotives use and their poor fit into the way people use cars).

As you might imagine from me digging up that old post, this is exactly the approach taken by a consortium of companies claiming credit for the the first hybrid drivetrain to power a small airplane.


Aerospace engineers at Siemens, Boca Raton, Fla., EADS, Herndon, Va., and Diamond Aircraft, London, Ont., Canada, are field-testing the DA36 E-Star, a plane that is a stepping-stone between gas power and a pure electric vehicle. The E-Star is the first aircraft to use electric power from a generator driven by a small gas engine. The two-seat, prop-driven plane’s serial-electric hybrid drive lets the aircraft take off quietly and cuts fuel consumption and emissions by up to 25%.


The plane carries a relatively small Wankel rotary engine from Austro Engines, Germany. It spins a generator, which, in turn, powers a 70-kW electric motor that turns the prop. The 28.5-lb motor gets additional electricity for taking off and climbing from a battery. The battery recharges during cruising. Overall, the plane uses 80 kW of power on takeoff and 65 kW during cruise. A new Siemens drivetrain cuts the airplane’s weight by 220 lb, which significantly extends its range.

I think I'm most impressed about them improving the weight efficiency of a small airplane this way.  General Aviation aircraft are a tough environment because they tend not to have much extra payload capacity.  They tend to be small and not very powerful.  The hybrid drivetrain has the effect of adding 220 lbs of payload for a given range or extending the range with the original ratings. 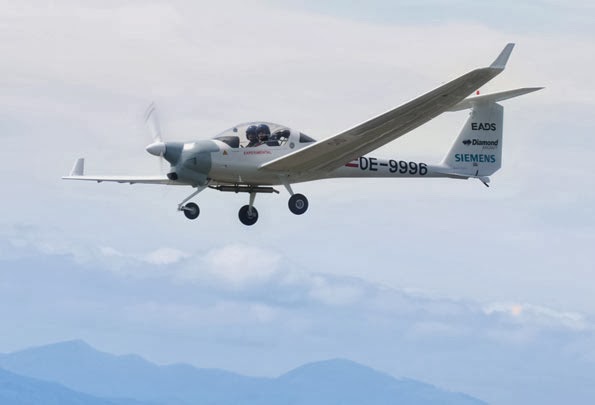 (Side note:  does this look like a macho, rugged aircraft to you?  Looks pretty light and fragile to me).