I've spent most of the last couple of days wandering around reading some interesting things, and I thought I might do a roundup/tab clearing/around the blogs post to point out a few of them.

John Robb at Global Guerillas posts "Is Extreme Wealth Concentration Profoundly Anti-Inflationary?"  He goes on to talk about the limited effect on prices the current money creation is having and concludes:


One reason this financial excess isn't causing rampant inflation is that it is flowing into the hands of a ever smaller number of people, and those people don't (can't) spend enough of it to inflate prices of everyday items.

IF this is true, and given the rate at which income and wealth is continuing to concentrate, almost any amount of expansion could be possible.

First off, I doubt inflation is as low as he thinks it is; think of how food packages have gotten smaller while prices have gone up at the same time.  Remember that food and energy aren't included in the inflation numbers so no matter how badly you get hurt, the official numbers say everything is fine.  I heard today that several areas of the country now have real estate prices above the 2007 peaks. That's more than the Fed's quoted 2% inflation goal!  Second, let's say Robb is right and there is very little inflation; since that demonstrates that the monetary expansion doesn't work, why would they want to keep doing it?  Monetary creation has the potential problem of alienating bond buyers, something we're starting to see now as 30 year bond yields are going up to attract buyers.  That has many bad potential side effects, so why keep doing it if it doesn't work?

Next, WRSA links to an article about an interview with self-proclaimed lesbian feminist Camille Paglia, in which she defends manliness, what she terms "Masculine Virtues".  She talks about the inherent differences between men and women in leadership: "If civilization had been left in female hands," she wrote, "we would still be living in grass huts.".  She talks at length about the "war on boys".


Ms. Paglia argues that the softening of modern American society begins as early as kindergarten. "Primary-school education is a crock, basically. It's oppressive to anyone with physical energy, especially guys," she says, pointing to the most obvious example: the way many schools have cut recess. "They're making a toxic environment for boys. Primary education does everything in its power to turn boys into neuters."

She talks about the fundamental idiocy of the doctrinaire feminists running so much of academia:


Then there was the time she "barely got through the dinner" with a group of women's studies professors at Bennington College, where she had her first teaching job, who insisted that there is no hormonal difference between men and women. "I left before dessert." (Emphasis added: SiG)

She even talks sense about some of the things that have us saying "where are the feminists on this?":


More important, Ms. Paglia says, if the women's movement wants to be taken seriously again, it should tackle serious matters, like rape in India and honor killings in the Muslim world, that are "more of an outrage than some woman going on a date on the Brown University campus."

I find the article remarkable not in what it says, but in who it is saying it.  Many more conservative women have said the same things, not to mention lots of guys.  In that sense, it's like walking into your 4 year old's room and finding him doing algebra.  It's not that the algebra is remarkable, it's who's doing it.

Almost everyone online, from calm rational folks like Borepatch and Bayou Renaissance Man to the "ready to hit the street with a battle rifle" crowd have linked to Clark's article on Popehat, "Burn the Fucking System to the Ground".   While I agree with so much of what he says, I find myself asking my usual questions:  Exactly what do we do?  BRM links to Joel at The Ulimate Answer to Kings with his response.  While Popehat says "Burn it to the ground", Joel says ignore it.  Turn your back on it and get away as best as you can.  I respect that, and I could probably do the kind of life he describes, but I also remember a quote attributed to Pericles that goes, “Just because you do not take an interest in politics doesn't mean politics won't take an interest in you”.  Saying no to governments usually leads to SWAT raids and your dogs being shot. An expanding tyranny will have to be dealt with at some point.

Finally, as a followup to last week's post on The Best Economy Ever.  A close up of the DJIA since 1987. 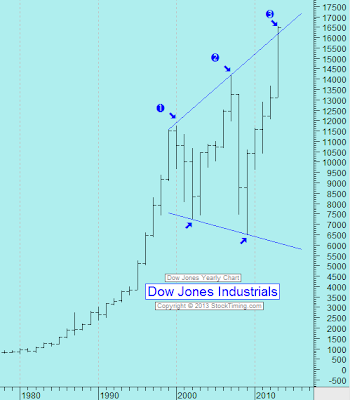 Comparing the left side of the chart to the right, before and after the start of the blue lines, you can see a progression of continually higher highs and higher lows on the left.  The low on the line of 1990 was above 1989 and below 1991.  That's a normal expanding market.  After that, the pattern of snap backs shows up.  The ugly thing is what happens during the first to second year after the yearly tick has hit the upper resistance limit.  You can see that there is typically a very large pull back within these two year periods.  That will be in 2014 to 2015.  Probably not "in three days" 2014, but it could be.

Now recall that the Fed has said they're going to start "tapering" this year: reducing the amount of monetary creation.  That constant flow of newly created money is what created this distorted market, and reducing the flow when the market is heading for a correction anyway will probably compound that correction.  It could get ... interesting.  Very bad timing on the Fed's part, and you can be sure that the Fed's technical analysts see the same things.

Posted by SiGraybeard at 4:49 PM