While it's generally true that the closer the government making laws over us is, the easier it is to intervene and change them, the fact remains that government in general attracts those who want to rule over other people, and they have a natural tendency to expand their rule over our lives.  To do so, they have a natural tendency to expand control over every aspect of our lives.  To borrow the "Philosoraptor" meme: 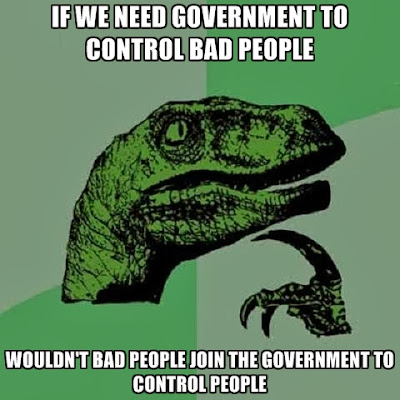 Today's example comes from little Kenmore, New York, between Buffalo and North Tonawanda.  A story on amateur radio site QRZ.com shows that city zoning has decided that hams should spend $1000 to file a permit for a radio antenna (not even a tower) on their property. That is for a permit, which may be denied and doesn't include any other fees.


The board passed a separate law Tuesday regulating the placement of amateur, or ham, radio antennas. The law includes a $1,000 application fee for a special-use permit.

In itself, that seems stupid to me.  Either it confuses towers with antennas or it's an attempt to make sure no hams have useful antennas in Kenmore.  A very useful amateur HF antenna can be made with wire thin enough to be invisible from more than a few feet away while cellphone towers are usually a hundred feet or more tall and quite visible from a mile or more.  How many teens, or young families, or retirees can afford $1000 just to apply to put up an antenna?  Plus, it ignores that in most of the country, hams routinely provide emergency communications support that the municipalities can't even afford to provide.  But stupidity is not illegal and if they want to chase amateurs out of the community, that's their privilege.

But my point isn't the stupidity of the law or outrageous amount of the fee.  My point is the city's response when an amateur told them that the FCC had preempted local law, declared they were in charge of such regulations and said that cities needed to "reasonably" accommodate amateur radio.


"Please note that the Village, prior to passing this law, had no regulations pertaining to HAM operators, and such antenna structures were prohibited by local law. This local law represents the Village’s efforts to expand the rights of HAM radio operators."

Here we see the classic petty-tyrant, control-freak bureaucrat view:  since there were no laws pertaining to ham radio antennas, they were therefore illegal.  Whatever is not specifically legalized is forbidden. Welcome to the police state.  And I add the banana republic tag because of the outrageous fee that guarantees nothing.

Posted by SiGraybeard at 2:30 PM