Conclusion: crap sandwich.  It doesn't do anything to correct the unsustainable, financially destructive course we're on.  Continue to prepare for the coming economic collapse or dark ages or whatever you want to call it.

You've got to know that the chances of a responsible budget deal getting done in DC are about the same as freezing to death in a Florida August, and this bill proves it.  The tiny cuts of sequestration are reversed and spending increases discretionary spending by $26 Billion next year.  It cuts the sequester reductions by $63 B over the next two years.  There is a promised spending reduction out in in the future.  They always promise to do things after they're out of office, or "in 10 years".  Very few details are available.  Some are here.

Most importantly, it doesn't go after entitlements or any of the real problems.  It essentially raises spending by fees (a tax by any other name...)  I'm sure you've heard about the TSA fees more than doubling; it also raises Customs and Border Patrol users' fees.  It cuts benefits to military retirees who are still "working age".  The modern definition of working age: alive.  Not really.  They mean under 62.

The ugly truth is that with the evil party in strong control of over 2/3 of the fed.gov, you're lucky to limit the damage to small increases in spending.

The cure for our economic problems is economic growth, and the way to get that is cut government spending and regulations drastically.  Send the Fed.Gov home.  There is no information I can find on the income side of the equation, but with discretionary spending of $1012 billion, that means the total spending when you include the nondiscretionary side is going to have to approach $4300 Billion ($4.3T) and with the kind of revenues we've had lately, we're still deficit spending at least half of that. 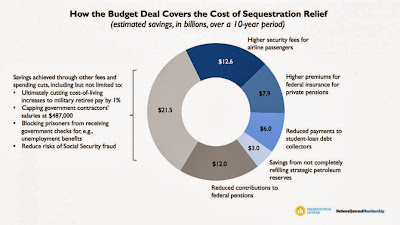 I guess I can count on not getting a Christmas card from John Boehner.