The Artificial Prices Must Give Way to Reality

For years, if not decades, America has been "Living the Lie" - as opposed to living the dream.  The lie is that the creation of debt by the central banks can create wealth.  Denninger often makes the excellent point that borrowing can only pull some growth forward in time, but that ability breaks down when there's no ability to make the payments on that debt.  That's exactly where we are now.  The fed has been living the lie - creating $85 billion per month, drowning us in debt.  Those foolish little tyrants think that they can manipulate business cycles away, and instead blow bubbles (another form of cycle) the likes of which mankind has never seen.  As that article in Der Spiegel says, the question isn't whether they've set up another crash, the question is when it happens.  (Graphic from Der Spiegel) 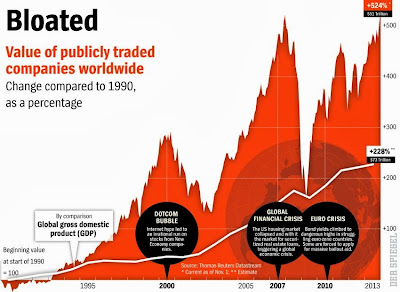 It never fails to amaze me when you tell people to beware because economic trouble is coming, they all sound like Chris Matthews and say, "but the stock market is at 16,000!"  Very few realize that it's simply the free money in the banks and other financial companies that are pumping the prices and that if you correct for inflation, the market is essentially unchanged since the year 2000.

Bill Gross of Pimco addresses this in his December column for investors, along with Mohammed El-Erian, Pimco's CEO in an interview originally with CNBC. The Fed has strongly hinted that the constant creation of money is going to "taper", although the interest rates will stay at approximately 0%.  The Fed is trying to wean the market off its teat, but the damage that the QE has created has permeated all investment asset classes.


The standard “three musketeers” menu for retail investors has always been 1) investment grade and 2) high yield bonds as well as 3) stocks. In recent years, institutional investors have gravitated into 4) alternative assets, 5) hedge funds and 6) unconstrained space, and so for them there appears to be an increasing array of higher return alternatives. All of the above 1-6, however, contain artificially priced assets based on artificially low interest rates. Some are unlevered, like Treasury bonds, but nonetheless priced too high by the Fed in an effort to encourage migration to riskier bonds and/or asset classes.

The benchmark 30 year bond yields have been going up since the summer of 2012 and just recently broke out of a flag pattern to the upside, indicating they'll continue to go up.  This means the market thinks these bonds aren't worth the price and demand a higher yield, another sign of decreasing confidence in the dollar.  These yields affect the prices of mortgages, so mortgages are likely to go up, too.  That's going to put a drag on everyday peoples' lives and affect everything.  Add in the expanding cost of health insurance and it has the potential to snuff out any hint of recovery.  And what they're claiming as recovery now is just the increase in prices from all the central bank machinations.


While this and its conjoined policy of QE may have only redistributed wealth as opposed to creating it (picking savers’ pockets while recapitalizing banks and the wealthiest 1% of our population), it is a policy that a Janet Yellen Fed seems determined to pursue. The taper will lead to the elimination of QE at some point in 2014, but the 25 basis point policy rate will continue until 6.5% unemployment and 2.0% inflation at a minimum have been achieved. [Note: not real inflation - that's around 8% now - they mean inflation as they define it - SiG]

El-Erian, for his part, just sees it as a "routine" market disturbance that can be planned for:


In stocks, it's no longer a risk-on trade, El-Erian said. "Look at sectors. This is going to be a very sector-specific market. Look at the disparities that have occurred across the world — that some emerging markets now are looking attractive relative to the U.S," he added.

"And finally, fasten your seat belt. There's volatility ahead as the Fed tries to change its policy mix."

Sooner or later, the Fed has to wean Wall Street off the free money that's been buying everything and let the market distortions they've created settle out.  There will be pain.  The central bankers' policies have led to a continually shrinking number of small banks and increasing profits for the "too big to fail" big banks.  It's an ideal situation for those big banks and you can bet they'll put pressure on the Fed to keep the free money flowing.  You might remember that just a couple of weeks ago, a former Fed official apologized for his part in "the greatest backdoor Wall Street bailout of all time".