The Best Economy Ever??

Yesterday, the DJIA set another nominal record (highest number, regardless of what it's really "worth").  Not just a record high, it was the 50th record high of the year on the Dow, with the S&P 500 recording it's 44th record high close of the year. An average of almost one per week for the entire year.

StockTiming.com posted this plot of the Russell 2000 Index, an index of smaller company (small-cap) stocks.  Nominally, the best it has ever been, too. 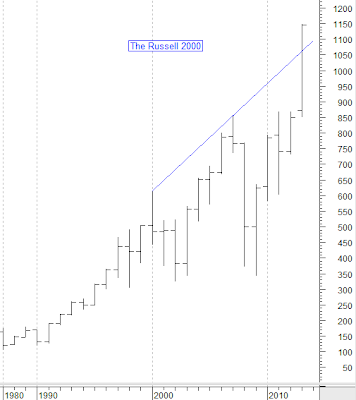 Clearly by these measures, the economy is better and healthier than ever in the history of the world.  Do you think things are better than in 2000, when the US Debt to GDP ratio was less than 58% (today it's over 107%)?  This measure says it is.  Expect it to start raining lollipops.  Expect lions and lambs to lie down in verdant fields washing each other luxuriantly.  Swords beaten into plowshares.  Peace and happiness for everyone forevermore.  Just listen to your favorite Democrat; I'm sure that's what they're saying.

Funny thing, that.  If you look at how the market has been behaving over the last 19 years, it has been displaying a discomforting pattern: higher highs, yes, but lower lows, too. 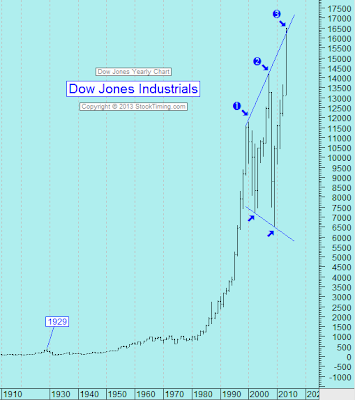 
If you don't get what this 19 year chart of the DOW is saying, do a search on "expanding wedge technical analysis".

The short version is that it indicates a snap back is brewing - see points labeled 1 and 2.  When it snapped back before, it snapped viciously, and the expanding wedge indicates a correction now would be to the range of Dow 6000.  The most dangerous time in a market is when everyone is saying it's good.  The old saying is that the time to buy is when there's blood in the streets and everyone else is selling desperately; the time to sell is when everyone thinks it's sunshine, lollipops and rainbows forever.

Dow 6000 would put blood in the streets.

Posted by SiGraybeard at 7:27 PM