Some Economically Free States Remain - The Question is Which Ones?

Townhall publishes a Fraser Institute report (92 page pdf) on the most economically free places in North America.  The institute is labeled as conservative/libertarian on Wiki, for what that's worth.  Take a look at the results (click to embiggen, as always) 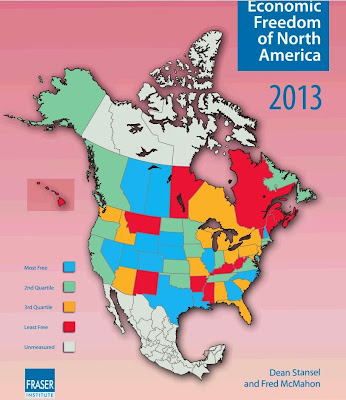 Note that they show Colorado as one of the most free, California as in the second quartile and a lot of other honestly puzzling results.  Illinois is more free than Florida and Tennessee?  Both Florida and Tennessee don't have state income taxes while Illinois does.  That surely can't be the only justification for being more free; but how much does it take to outweigh it? And California better than Arizona? I personally know some Arizonans who would love to send some of the California refugees back.

According to the report:


And here’s the ranking for economic freedom in states and provinces. As you can see, Alberta and Saskatchewan are in the top two spots, followed by the American states of Delaware, Texas, and Nevada.


If you look at the policies that sub-national governments actually control, the rankings change a bit. Alberta still comes in first place, but Saskatchewan plummets.

That sounds a bit more like my perceptions. North Dakota, home of the lowest unemployment rate in the nation, is just below them in 8th place.

My impression is that they developed an algorithm - a way to calculate an answer, these ratings - and they now believe it to be true.  In my business, we then spend a bit of time and money to see if the algorithm gives answers that agree with reality.  I think they need to do that.