Toby!? What Happened to You, Man?

The crowd was pretty dense, on a warm, humid, and occasionally rainy afternoon.  We got there late, after 2, and stayed almost till closing at 5.

The title here isn't about this, it's about Toby Keith.  Several sources are carrying the story that Toby Keith's new restaurant in Woodbridge, VA, "I Love This Bar and Grill", prominently displays this sign on the front door: 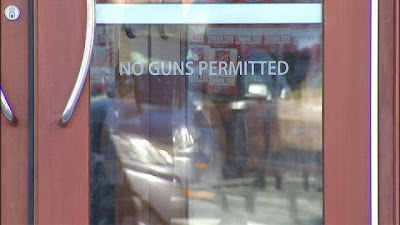 I'm not naive enough to think that Toby Keith is in a back office in this building going over the books, making sure enough pickles are on order, and seeing the sign every day; I'm sure he hired a company to run things for him.  It's possible he doesn't know (or didn't) - but I may be too generous with that.  David Codrea says:


It's instructive that five years after Keith wowed NRA members, he declared himself a supporter of “the most anti-gun president ever to occupy the Oval Office” in 2008 when he praised Barack Obama, calling him “the best Democratic candidate we've had since Bill Clinton,” and then honored Obama by performing at his 2009 Nobel Peace Prize ceremony in Oslo.

The Blaze linked to a Boston Herald interview Keith did in 2011 where he said he has a concealed carry license and carries everywhere he can.


“I’m all about good people, licensed and trained, carrying a concealed weapon,” Keith said. “The bad guys are always gonna be carrying guns. There are so many guns in the U.S., and so many bad people that do harm with ’em. If just 1 percent of the non-felons would go get their concealed-weapons license and carry a gun where they can, 1 percent puts you in a pretty good position of being somebody that could save a bunch of people’s lives.

I'm gonna give the last word to David Codrea on this piece:


That means if someone who is not deterred by “No Guns” signs decides the I Love This Bar & Grill in Woodbridge represents a soft target where evil is guaranteed success, Keith will have a tough time explaining to survivors why he thought rendering their loved ones defenseless was a good and moral business decision to make.

I know there are boycotts being discussed, but I'd never see the place.  I'm just sorry to hear we have another big name hypocrite putting his name on restaurants.