So Bernanke announced the Feds were going to taper - cutting $10 Billion per month from the $85 Billion they're creating out of thin air, an 11.7% cut in money creation, and the markets took off on the news, with the DJIA up almost 300 points (1.9%) 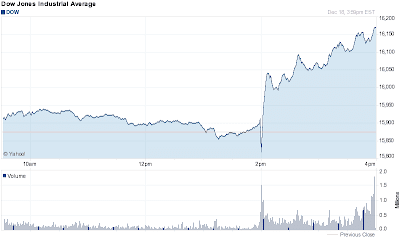 I admit I'm surprised.  I also don't think it's over.  But I'm just some random dood on the Intertoobs, not a highfalutin reporter for Forbes who says "The taper, it turns out, for the stock and bond market -- and perhaps even the economy altogether -- matters a lot less than we thought."   I think one day doesn't mean squat to the world's markets.

If you come here regularly or often, you'll know that I believe that the entire "recovery" in the stock market is a bubble being blown by the money the Fed is creating.  Corrected for this monetary creation, the DJIA has been going down in value since around the year 2000 (along with everything else - that's down in value, up in price).  All that money has to go somewhere, and that's where most (all?) of it's going.  I know there are those who think the velocity of money can be kept so low that inflation is not going to be a problem, but I laugh at that.  It's the perfect printer theory.

I expected the markets to repeat the famous hissy fit they threw a few months ago when they mentioned they'd have to taper some day.  I was wrong, at least for today.  But without the constant inflow of new money going into the market, I can't see how it can go up for any length of time.  To be fair, though, flow is still there, it's just down 11.7%.