Like many (most? all?) of you, I have a bunch of knives.  The first really good knife I picked up was a Cold Steel tactical folder (which I call my light saber because of how it cuts through pretty much everything), followed by a Spyderco Tenacious, followed by, well, a few more than most sane people would have.

Naturally, they get used for everyday tasks like opening boxes, shredding boxes, occasionally sawing off small branches, and lots of other things, which means they naturally get dull and need to be sharpened.  Like many people recommend, I picked up a Lansky system and got good results with it, but the problem is that it's pretty slow.  For those not familiar with it, these use a clamp and guide rod setup to fix the angle of the edge to the stone, which is absolutely essential for precise sharpening.  The problem is that with a range of knives with different blade sizes it can get tough to set up exactly right, so it becomes a bit cumbersome to do a lot of knives.  You wouldn't want to sit down with set of kitchen knives to sharpen on one of these.

Since I really do have a set of kitchen knives to get sharpened, I started looking for something with a motor.  I imagine everyone has seen the little motorized "kitchen table" type sharpeners, which are more "one size fits all" in the angle they cut.  I looked at those as a way to upgrade my sharpening, but decided I didn't like that aspect.

After looking at a lot of options, I settled on the Work Sharp Knife and Tool Sharpener - Ken Onion Edition.  The woodworking supply store Rockler (that link) has been running this special promotion for a few weeks, and I finally ordered one a couple of weekends ago.  It came last week, and now that I've put a dozen or so blades through it, I can say I like and would recommend it. 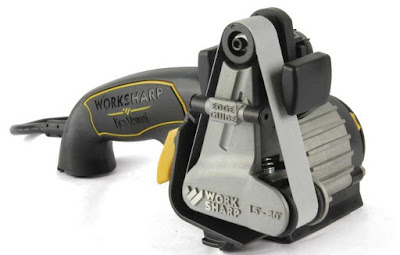 The feature of this sharpener is that it adjusts for a handful of knife angles, from the fine edge 15 degree angle of a filet knife to the 30 degree angle of a really tough blade like a meat cleaver at the turn of a knob (in the back at the top of that triangle shaped part.  Unlike the kitchen table sharpeners or the Lansky system, both of which use hard-backed abrasives (wheels or the mounted hones Lansky uses), this sharpener uses abrasive belts as you can see here.  I've seen several videos of knife makers sharpening their work, and I've seen that many of them use sanding belts.  The argument for the belt is that the rounded convex edge the knife takes on is stronger than the angled grind.  The Work Sharp manual explains it this way:


Our blade use and sharpness testing have taught us that a convex edge is a superior edge. The smooth radius edge type does not have ‘shoulders’ like a flat grind and creates less friction or resistance when cutting. A convex edge provides more steel behind the edge to support it, so the edge stays sharper longer. Lastly, our convex method thins the bevel when you sharpen the blade, while flat ground blades get thicker and thicker as you re-sharpen.

Before deciding to go with this sharpener, I read several reviews on knife makers' forums and found it well accepted.  There were a few minor comments against it, but the vast majority was positive.

I started out with a CRKT knife I probably abuse the most and put a wicked edge on it pretty quickly.  After another couple of pocket knives, I went to a Rapala filet knife I've had since (guessing) 1972 and quickly put a great edge on it.  Today I sat down with a half dozen knives: one kitchen paring knife and the rest tactical/outdoors folders.  I put a good edge on all of them in a few minutes.  I queued up all of them, and did all of them on one belt before moving to the next belt.  One knife took a while because it had dings in the blade that had to be ground away, but if the edge was in decent shape, it probably took a minute to sharpen one.

If you've got knives, you've got to sharpen them.  The Lansky system has the advantage of working with no external power, so if you have a cabin in the woods, or you're out camping or if the S has HTF, it's a good backup plan.  As long as the power is on to help, the Work Sharp system is a good way to approach sharpening every knife you've got.  As the name implies, it's also a tool sharpener and will sharpen axes, hatchets, lawnmower blades, not to mention kitchen scissors (I did a few of those, too, and brought them back from the dead).

Note to the FTC or whomever:  I paid for it with my own money.  Not a gift.  I get nothing for recommending it.