The Peculiar Story of How the Super Bowl Got Its Name

The name was actually inspired by the Wham-O Super Ball.  From Design News:


On Sunday, when more than a hundred million Americans turn on their televisions to watch the Super Bowl, they might consider first giving thanks to a polymer known as polybutadiene. Because were it not for polybutadiene, America’s greatest sports spectacle might now be called The Ultimate Bowl. Or worse, The Final Game.

If polybutadiene could talk, it might tell us that thanks are unnecessary. It was, after all, little more than a bystander during the odd decision-making process that led to the name, “Super Bowl.” But merely by existing, and by possessing some rather unusual mechanical properties, the synthetic rubber changed the course of professional football.

The story of polybutadiene’s role in the naming of the Super Bowl started in 1964, when a chemist named Norman H. Stingley was trying to devise a material that would be flexible, yet sturdy enough to serve as a cap on oil wells. Using polybutadiene along with hydrated silica, zinc oxide, sulfur, stearic acid, and some other ingredients, Stingley found he had created a synthetic rubber with a very high coefficient of restitution. Dropped from shoulder level, it would snap nearly all the way back up. Thrown by an adult, it had the ability to bounce over a three-story house. The material, he discovered, might make a better toy than an oil well cap.

“He formed it into a sphere and was playing around with it in his office when he realized he might have something unusual,” Todd Richards, president of Wham-O Inc., told Design News. “Back in the 1960s, if you came up with a crazy, wacky idea, the first place you’d go to was Wham-O.”

Indeed, Wham-O was the Stingley’s first visit. Wham-O executives quickly decided his material had the potential to join the company’s growing list of hot fad products, which already included the Frisbee, Hula Hoop and Slip’N Slide. In late 1964 and early 1965, the two hammered out a licensing agreement and set to work on making their new product, the Super Ball. An August 1965 patent, assigned to Wham-O Manufacturing Co., calls for the manufacturer to add sulfur as a curing agent to give the ball its resiliency. It also calls for a preferred manufacturing process in which the mixture is placed in a mold, heated to about 320F, and pressurized to 1,000 psi. The resulting recipe is said to yield a ball with “extremely high resilience and a high coefficient of friction.”

Given its qualities, it didn’t take long for the Super Ball to become a full-fledged American fad. By December 1965, six million had been sold, with peak production reaching 170,000 balls a day. A US presidential advisor even had five dozen of the balls shipped to the White House for the staff’s amusement, according to Wikipedia.

Around the same time, executives of the National and American football leagues had begun to discuss a championship game between their organizations. During the summer of 1966, six months before the first such game, they still struggled to find a name for it. Some team owners informally called it “The Final Game.” Others preferred “AFL-NFL Championship Game.”

But one of the American Football League’s main founders, Lamar Hunt, had a different idea. “As it turned out, two of his kids had Super Balls, and they would bounce those balls all over the house,” Richards told us. “Then they would come to his office and bounce the balls there.”

In his book, “When It Was Just a Game: Remembering the First Super Bowl,” author Harvey Frommer wrote that Hunt’s son recalled how the big game’s name came into being. “My dad was in an owner’s meeting,” Lamar Hunt Jr. reportedly said. “They were trying to figure out what to call the last game, the championship game. I don’t know if he had the ball with him as some reports suggest. My dad said, ‘Well, we need to come up with a name, something like the Super Bowl.’”

To be sure, the name was hardly popular with the other executives. Pete Rozelle, the young commissioner of the National Football League, wasn’t impressed. “Allegedly, Rozelle hated the name,” Richards told us. “He was pushing names like ‘Ultimate Bowl’ and ‘Premier Bowl.’ But those names didn’t have the same buzz.”

The name, “Super Bowl,” however, did have a lasting buzz. This Sunday, champions of the American and National conferences -- Denver Broncos and Carolina Panthers -- will meet again in Super Bowl 50, while approximately 115 million Americans watch.

Today, of course, the name is unchangeable –- a moniker associated, not just with a game, but with an American entertainment extravaganza. That’s a far cry, Richards says, from the days when polybutadiene balls were rocketing around Lamar Hunt’s office. “Even he was quoted as saying, ‘Yeah, it’s kind of silly and kind of corny, but I couldn’t come up with anything better.’”

In my mind, I can hear John Facenda, the guy they called "The Voice of the NFL" saying each of those names: The Final Game, The Ultimate Bowl and the rest.  Super Bowl sounds better.  (Sample of The Voice.) 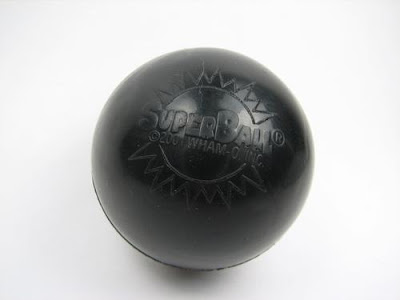 I remember watching the first game, and it was referred to as the AFL-NFL World Championship Game, although some voices in the media were already calling it the Super Bowl.  It wasn't called the Super Bowl until the third game, between the New York Jets and the Baltimore Colts, played in January of 1969.