This Will Be a Little Me Me Me

On an average day, Blogger says 1200 to 1500 of you stop by.  Thank you.  I'm truly humbled.  In the past few months, a post of mine that didn't seem terribly important at the time has slowly risen to the number two spot on my list of top 10 most popular posts with 6183 views: A Little More About .308 vs. 7.62x51.  Last week, it had 173 views, so if that holds, it will take the number one spot away in around 10 weeks.  I would have never guessed.  The post with the most comments ever is when I asked "Has Anybody Else Been Ripped Off By Iain Sinclair Design?  That post has 52 comments and I get them fairly regularly as people search for those words and find this.  My repost of that question has an additional 25 comments.  I wish I had been able to reach those 77 other folks and let them now before they ordered - as I wish I had found out before I ordered!

Happy Birthday to me.

A friend sent an interesting promotional video from Volkswagen.  I'd like to link it, but they don't allow that.  Which is just as well because I had to let it try to load for minutes before it finally played.

I found what is quite possibly the best furniture ever for a certain granddaughter's room. Finally, did you know that if you take a marshmallow Easter bunny and subject it to high pressure, it turns into Kim Jong Un? 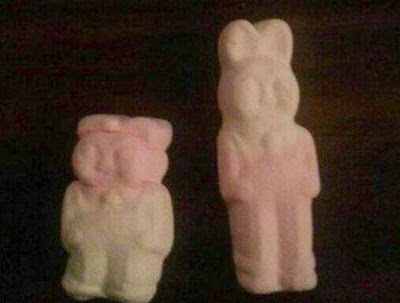 (From YouHadOneJob on Twitter.  You can blame Borepatch.  I spent the better part of an hour there.)

And now, since it is my birthday, I'm going to go play.