The first time I heard of a group of so-called Bionic Ants from a German company called Festo, my reaction was that sometimes even though you can do something, you shouldn't.  Maybe it was too close to our battles this fall with the big head ants.  Since there doesn't seem to be any actual biological materials in these, I don't think these are really bionic, and "Robotic Ants" is a more accurate name.  (Besides, I saw Robotic Ants open for The Nitty Gritty Dirt Band back in 1972).

The program is really a technology demonstrator for the idea of solving real world problems with autonomous networking of smart bots.  I think they were playing with the name Autonomous Networking Technologies, saw the acronym ANT, and they liked it enough to try to implement the bots as ants.  Festo is a company that's good at a couple of the key technologies involved, 3D Molded Interconnect Devices and piezoelectric actuators, and they created a small "swarm" of these robotic ants.  Interesting video at the link of the ants cooperating to move a load around a small work area.  They are rather complex, with circuitry built onto the body of a 3D printed ant, piezoelectric motors so they can move around, grasping jaws as built in tools, built in radio networking, rechargeable batteries, a recharging mechanism, and more. 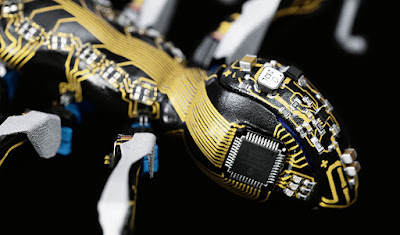 This circuitry resides under a more friendly but slightly anthropomorphic, ant-like visage, made of 3D printed polyamide resin (see what I did there?).  Where the compound eyes of real ants would go, these little things have a stereo video camera that looks more human - or at least more vertebrate. 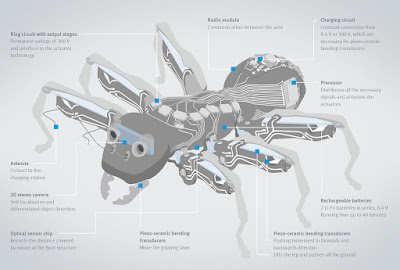 
Festo employs a laser-direct-structuring (LDS) machine to laser-etch the tracts and apply conductive metal coatings of gold, nickel, copper, or a mix. The external circuitry adheres to the curves of the ant’s body segments, eliminating the need for bulky wiring, since components can be directly soldered to the devices at the intended terminals. Minimal internal circuitry is needed, contributing to the compactness of the design. Read more about Festo’s 3D MID process here.

Each BionicANT works as a component of a multi-agent system (MAS) to perform heavy lifting-and-carrying tasks. They are programmed according to a distributed catalogue of rules created from mathematical model-building and simulations. These regulation algorithms govern their motions and enable the ants to alter their behavior as a response to environmental cues and RF signals generated by the other ants. For example, a simple regulation algorithm prevents collision by ensuring that the ants do not try to occupy the same space.

Communication generates from the RF chip in the ant’s posterior body segment. Also located on the posterior segment is a Cortex-M4 microprocessor (MPU), which processes RF signals and environmental cues. In addition, the MPU sends voltage signals to the piezo-actuators in the pincers and legs.

To be serious for a few seconds, these are hot topics of research in industry.  Swarming, cooperative, intelligent robots are seen as useful in applications ranging from warfare to factories.  Ants are often thought of as having a collective intelligence; witness the term "hive mind".  They can cooperate and a mass of ants can exhibit behaviors that make them look like liquids or solids, depending on the need.   Instead of these ants, picture swarms of small robots "flowing" around products, moving the products and working on them: products of any size.  These robotic ants, by the way, are actually pretty huge, even by Florida ant standards.  A pdf on the Festo website says they're 135mm long, stand 43 mm high and their leg span is 150mm.  In rough numbers 5.3" x 1.7" x 5.9".