Negative Interest Rates Aren't Going to Save the Economy

Among those things that are going on in the world of economics and politics are things that have never happened before.  Wide scale use of negative interest rates is one of those things.  Negative interest rates have been spreading around the world and are being considered for the US.  Note I mean rates that are called negative, fees or taxes, as opposed to negative real rates.  Negative real rates mean the interest paid on a bond or other vehicle is less than inflation; we've had those for years.  I've written about this several times; a reasonably good post is here.

Sovereign debt; government bonds from several countries, have now gone negative interest.  About $7 trillion worth of sovereign bonds now yield less than nothing. Lenders give their money to governments… who swear up and down, no fingers crossed, that they’ll give them back less money sometime in the future.  Public banks, I believe led by Alternative Bank Schweiz, have gone to negative interest and this presents an easy case to look at.

When you deposit money in a bank, that's an asset on your balance sheet but it's a liability on their sheet, because if you ask for that money, they have to pay you.  They don't stack your money up in some vault somewhere, they use that money as the basis for loans - but they can loan far more than you deposit under the concept of fractional reserve banking.  So whether you think of it this way or not, when you deposit money in the bank you're taking the risk that the bank will run out of money and not be able to pay you on demand.  It has been the normal case that the bank charges more money on interest to borrowers than they pay depositors, making a profit on the difference between what they loaned out and what they paid you.  But with negative interest, you pay them to make the loan that they make the interest on.

Same with a government bond, in which you're taking the risk that something happens to the country and they can't pay you back.  War, depression or inflation, revolution, natural disasters; all of these factor into how much risk buyers will stomach and the chance they won't get their money back.


That’s why countries with much uncertainty – such as Venezuela – have higher interest rates than countries, such as Switzerland, where the future is probably going to be a lot like the past.

All of this relates to pricing the uncertainty of the future.  If you were absolutely sure you were going to get your money back in the future, you might settle for a low interest rate compared to loaning to Venezuela or Greece.  In a way, negative interest rates imply the future is known perfectly, perhaps even better than the present is known.  You're certain there's no risk at all in those Swiss bonds.

This is yet another example of how horribly the central reserve banks; not just the Fed, but the European Central Bank, the Bank of Japan and all the others, have distorted the world's economies.  Interest rates being charged by the central banks are now so low that the next step in trying to create growth is to penalize you for putting your money in the banks and not spending it.  Bill Bonner writes:


The logic of lowering rates below zero is so boneheaded that only a PhD could believe it.

Economic growth rates are falling toward zero. And at zero, it normally doesn’t make sense for the business community – as a whole – to borrow. The growth it expects will be less than the interest it will have to pay.

Because the Fed only has direct control over the roughly 20% of the overall money supply. This takes the form of cash in circulation and bank reserves. The other roughly 80% of the money supply comes from bank lending.

How to prevent it?

If you believe the myth that the feds can create real demand for bank lending by dropping interest below rates, then you, too, might believe in NIRP.

There's no real evidence that if rates go negative people will spend more to keep their savings from evaporating.  In fact, there's evidence some savers, faced with seeing their savings not growing, double down on the saving, denying themselves even more and trying ever harder to save.  As Jim Rickards put it: "As a result, many citizens are saving even more from retirement checks and paychecks to make up for the lack of a market interest rate. So a Fed manipulation designed to discourage savings actually increases savings, on a precautionary basis, to make up for lost interest. This is a behavioral response not taught in textbooks or included in models used by the Fed."

Negative interest rates are going to fail to create growth just as every step up to now has failed.  Look, if Quantitative Easing hasn't helped Japan in the last 20 years, with all the QE the Bank of Japan has done, why would anyone think it's going to help anywhere?  Draghi, Yellen, Kuroda, and all the rest are either idiots or criminals and it's harder to believe they're idiots.  All they're doing is taking money from lower incomes and transferring it to their cronies.


There is no means of avoiding the final collapse of a boom brought about by credit expansion. The alternative is only whether the crisis should come sooner as the result of voluntary abandonment of further credit expansion, or later as a final and total catastrophe of the currency system involved. - Ludwig von Mises, "Human Action - A Treatise on Economics", 1949 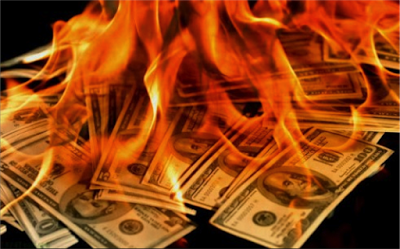