California Wants to Rule Anything is a Gun

In the last couple of days, a bill in the California legislature has been reported on (H/T to Black Rifle Builders, a new link of mine, and Gun Free Zone).  Bill AB1673 essentially outlaws 80% receivers, and makes everything "readily convertible" to a firearm regulated the same as any other firearm.

The problem is the definition of "readily converted" and exactly what they include in that vague sentence.  If you have the STL files to run an AR lower on your 3D printer, exactly what is the gun?  Today, once you print a complete lower, that's a firearm.  But could they make the file itself a gun?  After all, with the proper 3D printer the file is readily converted into a finished lower.  Various groups, like the US State Department, have already tried to stop the distribution of 3D Printer gun files; is this another push?

Let's say you have a typical 80% lower but don't have a drill press or milling machine or any other tools.  Can it be "readily converted"?  Not by you, at least not right then, but buy a drill press and now it is!  On the other extreme, if you're a machinist with a good shop, a pile of any appropriate metal stock can be readily converted into a firearm.  Many different firearms, in fact.  If we refer to machinists, than any metal stock must be considered a firearm.

Consider the poured resin AR lowers that McThag has been experimenting with.  (I think these guys are the makers).  Like the 3D printer, what comes out of the mold is already a firearm - it's a 100% lower.  But what about the mold?  You use the mold to make a firearm, but the mold itself isn't converted.  The resin becomes the firearm but it isn't readily converted to anything.  Pour it on the floor and it converts to a puddle.  It won't take the AR shape any more than any other shape without the mold.  How do they regulate this?

We all saw that video of the guy who made an AK from a shovel; does that mean shovels "can be readily converted"?  What about the sheet steel stock selection at any metal dealer?  As commenter Loess at GFZ pointed out,

To which Miguel replied:


The DIY Sten Gun.
http://www.mediafire.com/view/5v4852yage8d8c5
Literally you get all the stuff at Home Depot.

The road that the California state legislature is going down ends in a couple of ugly places.  It could end with every single part that goes into a gun being serialized and tracked.  IMO, the whole reason for the "80%" gun coming into being is that gun owners have the right to fix or modify our guns.  If we wear out a barrel, we can replace it.  If we want a better trigger, we can modify (or replace) it.  The Feds don't require people who make recoil springs, for example, to serialize and track them.  At some point, though, to use their system the BATFE needed to define something as being the gun.  That's the part that gets serialized, tracked and managed.  They decided that at the 80% point, the receiver was like any other piece of metal that isn't a gun.  It's no different than any paperweight.  By California saying a component that's not usable as a firearm has to be considered one, doesn't that imply any other thing that isn't a firearm has to be considered as one? 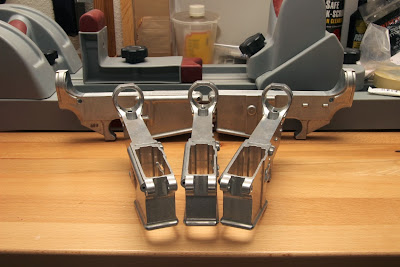 Alternatively, it ends with a hodgepodge of overzealous prosecutors and stupid judges deciding these questions.  A nation not of laws, because the laws are so vague they could mean anything, but of men who choose what they mean on some sort of whim.  There's already far, far too much of that.