Time For a Four Week Break

After a lot of self-debating, tossing and turning things over and over in my mind, I continued ahead with my plans to rebuild my ham radio tower setup, as described here two weeks ago.  Today, a helper and I dug a 2'x2'x3' deep hole, built a rebar cage, coated the aluminum pipe with a heavy sealant and put it up.  The rest of my parts for the job are here, but no more work will be done for a while.  Concrete used in critical places (self-suspending balconies, for example) has to cure for 28 days before the forms are taken off, so I'll leave this sit with no stresses on it for those 4 weeks.  Or thereabouts. 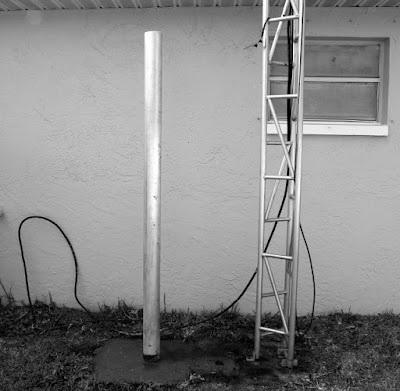 There was a long discussion in the comments back then about just using a 4" PVC pipe filled with concrete instead of aluminum pipe.  In the end, I went with this pipe for a few reasons.  Most importantly, I'm not experienced enough with the PVC approach to feel sure that it would hold up, and I wasn't able to get enough information to convince me.  Since I'd already bought this aluminum pipe, and was familiar with everything I'd done to get to this point, I decided to go with what I had.  As a bonus, if I wanted to go to a bigger tower or heavier load, I feel confident this is capable of handling it, while with the PVC pipe approach, I'd be less sure I could do that.

Before you ask, there's a plastic plug in both ends of this pipe so that it can't fill with water.

My plan for now is that once the pad is cured sufficiently, I'll mount all the hardware I bought to replace the winch and cable, and then crank the tower over.  Once that's down, I can do a bit of routine antenna maintenance, like check the cables and connectors.  I'll get a good look at the house bracket and see if it needs anything beyond the bit of scraping and repainting I can see now.  I should be done by the end of March.

For the next few weeks, though, this job will mostly just sit.  There's indoor work to be done getting the hardware ready to mount, and I'll be spending more time on my CNC conversion project.