Thirteen years ago this morning, February 1, 2003, the space shuttle Columbia broke up on re-entry at the conclusion of a successful mission, taking the lives of seven astronauts.

It's a peculiar coincidence that in the history of NASA's manned space flight programs exactly three incidents caused the loss of the vehicle and everyone aboard, and all three of those fell within a single week ending today with Columbia:

Apollo 1 burned on the pad during a test, killing Gus Grissom, Roger Chaffee and Ed White on January 27, 1967 .  It was the result of a pure oxygen atmosphere and a spark from a wiring defect.

Shuttle Challenger was destroyed on January 28, 1986, 73 seconds into mission 51-L, as the starboard solid rocket booster's O-ring gaskets, stiffened by the cold, allowed a secondary flame to burn through supports and cause the external tank to tear apart, and then detonate the liquid hydrogen and oxygen it carried.


January 27 to February 1 is five days.  The Challenger disaster can be tracked directly back to launching on a record cold morning in a vehicle that just wasn't safe at that temperature.  The other two don't appear to have any aspects to their histories that could limit it to this one week in time.  They could have happened at any time.

The Orlando Sentinel printed a long piece on the timeline of what destroyed Columbia just before the first anniversary of the disaster in 2004.  It's still there, although it seems to talk about photos that are no longer there.  Columbia and her crew were sentenced to death during their liftoff on January 11, it's just that no one knew it.  A chunk of foam had broken off the external tank during liftoff and hit the left wing's carbon composite leading edge, punching a hole in it.  There was no way a shuttle could reenter without exposing that wing to conditions that would destroy it.  They were either going to die on reentry or sit up there and run out of food, water and air.  There was a report that some engineers wanted to use a DOD spy satellite to take photos of the shuttle and assess the damage to the wing (they learned about the impact )the day after launch), and that management shut them down - as happened with engineers who thought it too cold to launch Challenger.


In 2013, Hale recalled that Director of Mission Operations Jon C. Harpold told him before Columbia's destruction:

You know, there is nothing we can do about damage to the TPS [Thermal Protection System]. If it has been damaged it's probably better not to know. I think the crew would rather not know. Don't you think it would be better for them to have a happy successful flight and die unexpectedly during entry than to stay on orbit, knowing that there was nothing to be done, until the air ran out?

During reentry, hot plasma worked its way into that impact hole, through the structure of the wing, burning through piece after piece, sensor after sensor, until the wing tore off the shuttle and tore the vehicle apart.  Local lore on this one is that the original foam recipe on the external tank was changed due to environmental regulations, causing them to switch to a foam that didn't adhere or stand up to abuse as well.  From the Orlando Sentinel piece:


The team concluded the foam broke away from the left bipod ramp 81.7 seconds after liftoff and hit the underside of Columbia's left wing two-tenths of a second later. The foam measured 21 to 27 inches long by 12 to 18 inches wide. It was tumbling at 18 revolutions per second. Before the foam separated, the shuttle -- and the foam -- had a velocity of 1,568 mph, about twice the speed of sound. Because of its low density, the foam rapidly decelerated once in the airstream, slowing by 550 mph in that two-tenths of a second. The foam didn't fall on to the leading edge of the left wing as much as the shuttle ran into it from below. The relative speed of the collision was more than 500 mph, delivering more than a ton of force.

[On July 7, [2003] investigators using a nitrogen-powered cannon fired a 1,200-cubic-inch block of foam weighing 1.67 pounds at RCC panel 8, taken from the shuttle Atlantis. Traveling at 530 mph, the foam blew a ragged 16-inch hole in the RCC panel, vividly demonstrating how much damage foam could do.]

After Challenger, missions felt a bit more raw and I think we all sort of held our breath until the solids were dropped.  By the time the intervening 17 years had gone by and Columbia happened, it was feeling routine again.  We're a long way from space flight ever being routine. Closing words back to the Orlando Sentinel piece:


One of the crew members came to rest beside a country road near Hemphill [TX]. The remains were found by a 59-year-old chemical engineer and Vietnam veteran named Roger Coday, who called the sheriff and then watched from the porch of his mobile home as a funeral director drove by to collect them.

"The astronauts have always been my heroes," said Coday, who that afternoon fashioned a cross out of two cedar logs he had cut earlier and erected it at the place where the astronaut had fallen to Earth. 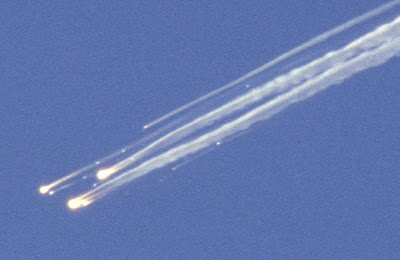 The pieces of Columbia continue their descent.  (Dallas Morning News)