The media has been full of hype and hysteria about lead in the Flint water supply.  It has become a proxy for all the usual social engineering hype we read about.

Want to know the real story?  It's a bit involved and it will help greatly if you understand or remember a little Chemistry.  Chemical and Engineering News, the publication of the American Chemical Society, has an in-depth look at the full story.  As usual, let me drop a couple of bits to whet your appetite.

To begin with it wasn't everywhere.  Some houses and some readings were much worse than others.  For example:


When Virginia Tech researchers tested the water in LeeAnne Walters’s home in Flint, Mich., this past summer, one sample had lead levels that reached a staggering 13,200 parts per billion.

That’s almost 900 times as high as the 15-ppb regulatory limit set by the Environmental Protection Agency. When lead levels exceed that threshold, water utilities must act to reduce concentrations of the toxic element.

Sounds (and is) quite terrible.


By early September, Edwards and his Virginia Tech team had sampled water from 252 homes and reported on their website, flintwaterstudy.org, that the city’s 90th percentile lead level was 25 ppb. EPA’s action limit is based on a 90th percentile calculation, meaning that if 10% of homes exceed the agency’s 15-ppb threshold, then action is required.

That says only 10% of the homes had a lead level at 25 ppb or higher; LeeAnne Walter's house not only was terrible, it seems the problem had to be related to either something in her house or something else very close to her house.  For perspective, even if the lower 90% of the city was all 25 ppb, it still wasn't above twice the EPA limit, so it was bad but not terrible.  For reference, EPA limits on various things are often quite questionable, and I don't necessarily think that the other 90% of homes are at inordinate risk due to lead exposure.  For sure, the folks in the worst 10% of homes are likely at risk, especially if the levels got close to LeAnne Walter's levels.

The problems started when Flint switched from the Detroit water system to using water from the Flint River.


When the city began using the Flint River as its water source in April 2014, it didn’t adequately control the water’s ability to corrode those pipes. This led to high lead levels, rust-colored tap water, and possibly the growth of pathogenic microbes.

The thing to remember is that the media and the people screaming for attention will show you a picture like this... 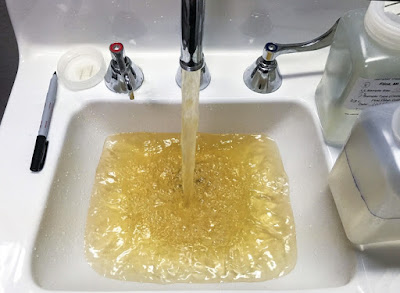 but that's rust in the water.  Water with nothing but twice the allowable amount of lead is perfectly clear.  They're trying to obfuscate things with a compelling image.

It's an interesting story, especially if you find things like corrosion protection in pipes interesting.  Flint changed water sources and the chemical makeup of the water changed a lot - all the stuff in the water besides just plain water changed.  It even has to do with how the city uses far less of its infrastructure than it used to, which means a lot of water sits around for long periods.  But mostly it's mismanagement and other idiocies.  Final words to the C&EN article;


“What we learned here is when we collect data, we need to use those data,” Masten says. She points out that the water utility officials were already collecting all the data they needed—pH, alkalinity, chloride levels—to determine if the water was too corrosive.

They had the data.  They just didn't bother to use it.