Last week, the FCC released a statement saying they will start the regulatory process to require cable companies to abandon the proprietary formats used in their set top boxes.  In essence they want to make these formats open source so that app writers and competing hardware makers can provide alternative ways to view cable TV offerings.  This is being done in the name of providing more choice to consumers in how the access programming and even what programming they have available.

Sounds good, right?  I mean, who could be opposed to more consumer choice and more access?  At times like this, I resort to an old mental model of mine that first gelled in my mind in the 1970s: think of the Fed.gov as a retarded giant.  The giant may want to help you, but it's just as likely going to step on you and kill you.  It's going to be slow to move, and when it does move, it's going to be clumsy and dangerous.

In a counterpoint editorial, Michael Powell*, who was the FCC Chairman under W and is now chairman and CEO of the Cable industry's trade group the NTCA,  points out the obvious: it seems that what Chairman Wheeler at the FCC wants to regulate has happened already without gubmint intervention.  They're going to assure "more consumer choice and access to programming?"  Has the FCC heard of Netflix?  That Netflix and Amazon have won awards for their programming?  And he wants us to be able to stream TV onto any device?  Our local company is Bright House Networks, and I have a free app they provide to stream cable programming onto my iPad (not to mention they run commercials every 20 or 30 minutes encouraging people to stream more). Powell points out:


Contrary to Wheeler’s assertion, cable content can already be watched on iPhones, iPads, Xboxes, Rokus, smart TVs and more. Pay-TV companies offer apps of their services for millions of customer-owned devices, as do most major TV programmers. HBO Now, anyone? But irrespective of real progress, no good market seems to go unregulated these days.

Chairman Wheeler wrote an op ed for a site called re/code arguing that consumers spend too much money on set-top boxes.


Today, 99 percent of pay-TV customers lease set-top boxes from their cable, satellite or telco providers. Pay-TV subscribers spend an average of $231 a year to rent these boxes, because there are few meaningful alternatives.

He points out, and is accurate as far as I know, that the companies make back what those boxes cost them and then continue to collect the monthly fees.  In counterpoint, Michael Powell says


What the FCC fails to make clear is the cost of leasing a cable box will be replaced with the cost of buying and using a retail box. Retail boxes in the market today are no bargain. The latest Tivo box will cost you $299 to buy, and after the first year, you will pay a $14.99 monthly subscription fee (forever). And to get any new innovations in boxes, you will have to toss yours out and buy a new one.

It's time for me to fill in the details on the asterisk above, next to Michael Powell's name.  See, I personally detest the guy because I (and every other ham radio HF operator) have been injured by him.  He's the guy, who as FCC chairman, allowed the abomination of BPL or Broadband over Power Lines.  Thankfully, the system never really showed up in my area, but the FCC authorized BPL at interference levels 40 dB - 10,000 times - greater than other "unintentional radiators" they regulate.  When hams complained, the FCC effectively said, "sue each other".  I think he's a crooked "crony capitalist" who used his power and position as FCC chairman to funnel money to some companies to sell BPL systems, presumably to get some return from those companies.  Perhaps this job at the NTCA?  On the other hand, going by the "takes one to know one" theory, he may be well qualified to recognize Wheeler doing the same thing!


Sadly, the real benefits of the FCC’s proposal tilt decidedly to the commercial interests of a few well-heeled tech companies. What’s in it for them? In short, they get to create their own video service on the back of others. Rather than negotiate and pay for content — like all video streamers do today — they want the government to mandate its free availability. Why negotiate and pay for ESPN, Food Network or TV One, when the government will create a mandate that lets you build a box and fill it with top-value content without paying a dime?

I kinda hate to say it, but while Michael Powell may be a corrupt scumbag, I think he's right on this one: no good market seems to go unregulated these days.  I think the FCC action is the classic Washington DC idiocy of trying to legally mandate things that have already happened and take credit for creating them.  Throw in some corruption, money under the table, and it's whole DC package.  They're never as fast and as good as the free market and they're out of touch with reality.  I find I actually trust an industry trade group more than the government - unless they're trying to lobby the Fed.gov, in which case I want a pox on both of them. 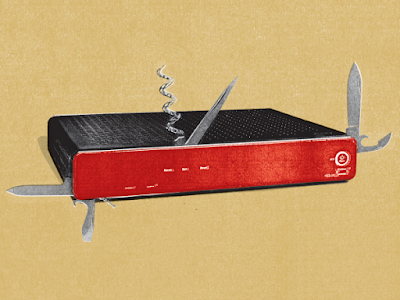