I've spoken several times about my project to convert my G0704 mill to CNC, but this winter I have a project that has taken precedence.  I need to do some serious maintenance on my ham radio tower installation.  As in rebuild a lot of it.  It was put in place around 1990.

I have just about the smallest tower that hams routinely use: 20' tall.  With a mast in it, it gets the top antenna up to 28'.    Most guys use a couple of 10' sections of Rohn steel tower (25G), burying one section a couple of feet and using one or two other sections.  When I put it in I designed a method of leaning the tower over to work on or remove antennas.  Living in hurricane country, I wanted to be able to get the antennas off easily.  My friend N4RFC (in the blog list) used to live a couple of blocks away, when we both lived in South Florida.  When Hurricane David was approaching, he and I took down both his antennas and mine, but then had to help another guy in the neighborhood take down his antennas.  He had broken his leg and was on crutches, so he was unable to do anything to help take down his antennas.  By the time we got to his place, the winds were getting up 25 or 30 mph and the two of us were on this third guy's roof, on a ladder, taking down his antennas.  That was my motivation to never have to do that again.

Mine is an aluminum tower, so it's lightweight, and the tower has a hinge built onto its base in the form of two "ears" of angle aluminum put in place before the cross piece was welded on.  I poured a concrete base and sunk a couple of redheads that those hinge pieces bolt to.  It's fairly easy to walk the tower up with just that hinge, but I wanted a way to crank it over.  A friend had a 10' long piece of 2 1/2" schedule 40 steel pipe that became my method.  I dug a hole 3' deep for it and put it in the ground at the same time I was pouring the concrete pad.  The concrete doesn't encapsulate the entire 3' of pipe in the ground, but just the top foot; the rest is just in compacted soil.  Once the pipe was up, I mounted a boat trailer winch to it at waist height and hung a pulley from the top end.  To lower the tower, I loosen one nut at the bottom, two bolts holding a clamp that attaches the tower to a house bracket, put a little slack in the steel wire rope, give it a little push and then crank the tower over until the antenna almost touches.  Then I wedge a small step stool under the tower and transfer the weight onto the step stool (slacken the wire rope).  In the case of hurricane warnings, I can have my antennas down and safed, and then be back inside with my feet up in under 30 minutes.

The centerpiece of all that is the pipe.  See up there where I mentioned it was "schedule 40 steel pipe"?  In a region where humidity is one of our major exports, rust is your enemy that never sleeps.  I had my first rust issues within five years, and I've been fighting rust on it since about 1995.  I actually gave up and said I have to replace it a couple of years ago, but something always got in the way to distract me.  Now is the time.  Swearing I never want to work on rust again, I got an aluminum pipe.  I figured out how much the pipe I have should bend under 200 pounds of load, and then sized an aluminum pipe to handle that.  Then I got one a half inch bigger.  (The amount of bending depends on a property called the moment of inertia of the shape, which scales as radius to the fourth power so an extra half inch makes a noticeable difference).

For much of the last month, I've been rounding up parts to rebuild everything, and just dealing with all the pieces that need to be worked on.  I spent a full week trying to get a stainless steel U-bolt!  The bolt itself was hard to find, and the one supplier I could find wanted to charge me $19.50 for one bolt and almost the same to ship it.  With a little delay, I was able to pick it up in town with no shipping charge.  I spent another week trying to find a replacement winch.  If you don't want the same old standard stuff every home repair uses: PVC or ABS pipe in small sizes, or a winch with a nylon strap, it gets difficult.

While all of my antenna projects tend to begin with "when it cools off", the other side of that is, "I've got to get this done before it gets too hot again".  I should be good for another six, maybe eight weeks; after April 1st, it gets more iffy.  But this is one reason why I've been a bit "on again, off again" around here. 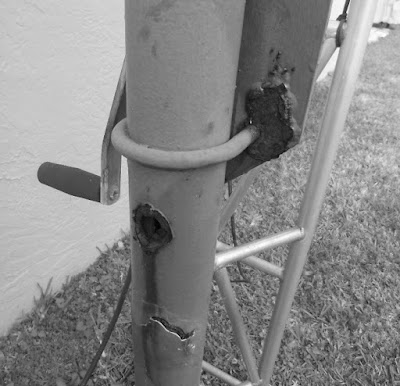 Some of the problem.  Rusting holes.  Rust around bolts.  That cracked area near the bottom is Bondo body putty.  I cleaned out the rust, wire brushed it and sanded to bare metal with sanding drums on my cordless drill.  Dried it, filled the hole with Bondo and painted over with Rustoleum.  Two years later the rust was pushing the Bondo out of the holes.