Surprising Place for an EMP Article

Although I'm retired and don't particularly feel the "fire in the belly" to go do some work, I am still interested in electronics and keeping up with the field.  At least for now.  (When I feel the fire in the belly, I just grab a couple of Prilosec OTC and the feeling goes away in a little while).

Because of my interest, I set up as a consultant and started subscriptions to the industry magazines, newsletters, and assorted junk mail.  One of the emails I get is called Planet Analog, which as the name implies is dedicated to analog electronics design.  I was a bit surprised to see a blog post called, "It's The End Of Civilization As We Know It!! Oh, Wait... It's A Squirrel."  The author begins by talking about the House hearing last May (it's a 2 1/2 hour video!) and the possibility of this "existential threat", with a 90% fatality rate through "starvation, disease, and societal collapse."  In turn he references these 2010 papers (part 1 and part 2) by Harvard astrophysicist Yousaf M. Butt (I can't help but wonder if that's his real name) which proposes that the threat of an EMP attack is highly overblown, and what we should really be emphasizing is the threat of a solar flare.  They go on to say that if we are hardened to a solar flare and its Ground Induced Currents, we're well hardened against an EMP, and reduce the chance of an EMP attack being waged against us in the first place.


I first briefly describe the source of the various types of electromagnetic pulses that are the sub-components of what is generically termed “EMP”: E1, E2 and E3. To properly assess the effects of EMP on electric power systems, appropriate specifications of these E1, E2, and E3 sub-components are vital. I follow by a short review some historical US and Soviet high-altitude nuclear explosions that took place 1955-1962 in order to see what may be learnt from such archival data. Lastly, I evaluate the possible threat we may face from an EMP attack, as well as that from geomagnetic storms, and conclude with some suggested responses.

Have you ever heard there are three principle types of EMP?


Each type has a different effect on electrical systems. An E1 pulse, the fastest, has a rise time in the nano-second range. It only lasts for a microsecond, but during that time can induce fields of up to 30kV/m at ground level. E1 affects primarily integrated circuits, and can damage relays, computer controls, and communications.

An E3 pulse is the lowest amplitude and has the lowest frequency, less than 1Hz. It can last up to 1,000 seconds, though, and poses the highest risk to the electrical grid since it can induce large currents even in buried cables. An E3 pulse can destroy HV and EHV transformers due to internal heating.

The E1 pulse is probably the one you're most familiar with because of its extremely high fields (30,000 Volts/meter); this one is called the Early pulse because of arriving first and being over within a microsecond.  The E2 pulse arises mostly from the E1 pulse and collisions of subatomic particles in the atmosphere.  It can last up to a second.  The E3 pulse comes about as a result of the ionized explosive fireball expanding and pushing the earth’s magnetic field (due to the fact that it is an electrically-conductive region), in a “heaving” action. This pulse can last up to 1,000 seconds or longer.  Exactly how bad the effects of these pulses are is heavily dependent on yield, altitude of the blast, and other factors.  The data that is openly available is pretty sparse, and I have to suspect most of it is classified.  Much of the literature that's available comes from megaton-class tests that the US and Soviets carried out in the 1950s through 1962.  They state:


Many of these were powerful megaton-range weapons and their effects cannot be simply interpolated to lower yield weapons (such as new nuclear proliferator states may possess), nor is it trivial to infer what effects they may have had upon the much more sensitive modern electronics. Of course, it is also important to recalibrate the expected effects from similar weapons exploded in different parts of the globe: detonations further from the equator, or those taking place in a high magnetic field region, will generally lead to stronger peak E1 pulse amplitudes, other things being equal.

Dr. Butt then goes on to speculate that the chances a terrorist organization or rogue state would be rather unlikely to try such an attack because it's much harder and much riskier than it sounds.


Thus, it is not at all a simple matter, even for countries with considerable resources and focused decades-long effort, to build such weapons, let alone pair them to reliable delivery systems. As carefully argued by John Mueller in his new book, Atomic Obsession, it is virtually impossible for a terrorist cell to obtain the raw materials needed for a nuclear device and assemble it correctly themselves [Ref 22, p. 172–198]. Even a “crude” U-type device is not all that “crude” and requires the concerted effort of skilled scientists and engineers. Any weapon produced by a terrorist cell would likely be a one of a kind and would have to remain untested. For a terrorist group to then mate this weapon to a ballistic missile and successfully carry out an EMP strike beggars belief. As John Pike, director of GlobalSecurity.org has said, “It is just very difficult to imagine how terrorists are going to be able to lay hands on a nuclear-tipped missile, and launch it and reprogram it in such a way that it would be a high-altitude burst like that.”

They go on to state that the chances a nation state with more resources would attempt an EMP attack aren't very great either.


A state would be highly unlikely to launch an EMP strike from their own territory because the rocket could be traced to the country of origin and would probably result in nuclear or massive conventional retaliation by the US. The EMP commission also considers adversarial nations carrying out a shipborne EMP attack that would be less traceable. However, even so, there would some small risk of trace-back that would give the leadership in such nations pause... Furthermore, the US certainly has data, via its DSP satellites, on the infrared (IR) signatures of the rocket exhausts from the missiles of various countries. Though these signatures are probably virtually identical for the Scud/Shahab/No-dong family of missiles, the nations which may entertain such attacks do not necessarily know whether, e.g., the DSP data can discriminate between a NK Nodong versus an Iranian Shahabs, perhaps due to differences in fuel and/or subtle design idiosyncrasies. This is data only the US has, and it has an inherent deterrent value to nations thinking about launching an EMP strike via a ship-launched ballistic missile.

There's a saying in personal defense training that goes something to the effect that we shouldn't draw out in our minds exactly how our gunfight looks; how it might break out or exactly what we think our attacker is going to look like so that we don't sacrifice awareness.  If I'm only expecting a 16 to 30 year old male, say, I might not pay any attention to the 13 year old girl who has been sent to get me to lower my defenses or distract me.  That idea was playing through my mind as I read this.  When we say that our logical analyses lead us to conclude that it's unlikely, the unspoken assumption is that a Kim Jong Un or Ayatollah Khamenei or the Revolutionary Guards see the situation exactly the same way we do; or that they base their decisions on the same value system we do.

Nevertheless, I'd recommend that you read both of those EMP papers by Dr. Butt because there's a lot of useful information in there. 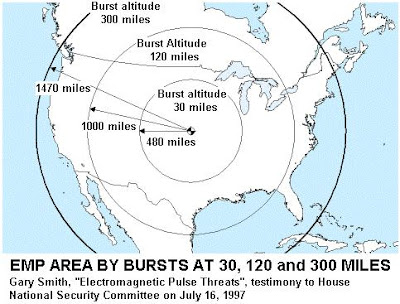 The punch line to the original article's title is that the House committee meeting was worried about EMP, but squirrels cause around 12% of all electricity outages by shorting out equipment as they use poles and wires to go about their daily business. (I hear they email Nigerian princes...).