The Loss of Antonin Scalia and The Coming North American Ugliness

Commenters to my post about the passing of Justice Scalia are uniformly pessimistic and express the belief this will be the lead-in to our current cold civil war going hot.  That's a pretty common sentiment (90 comments so far), and it's backed up by others who are skeptical Justice Scalia would have died of natural causes and not some sort of poisoning or assassination. This is very widespread around the 'net.

Scalia's death does not (in my mind) signal that war is inevitable.  I reached the conclusion that war was coming from a different line of thought.  Consider this: despite having been in elected office for a thousand years, Bernie Sanders is considered an outsider.  Donald J Trump is certainly an outsider, and it's arguable that the three candidates with the best chances of taking the Stupid Party nomination are all outsiders to some degree.  An all outsider election in the fall is distinctly possible.   (As an aside, the name Donald J Trump reminds me how so many cartoon characters have J as their middle initial: Elmer J Fudd, Rocket J Squirrel, Homer J Simpson...)

What the attraction to so-called outsiders tells us is that both sides think their mainstream parties aren't doing what they want them to do.  The important part is that the liberty minded people on the right feel that the last 15 years or so have been a constant assault of never-ending threats to personal liberty and desperately want our country back.  The left feels that the last 15 years haven't gone anywhere near far enough and desperately want (arguably) Bernie Sanders to complete the fundamental transformation to a socialist republic.  You've seen the anti-gunners saying that Obama hasn't gone far enough; the same holds for those who want single payer health care (where killing patients is a feature, not a bug!), and the entire Nanny State.  We desperately want a country back where personal liberty and determination can live again; they desperately want a country that never was!

Those two views are fundamentally incompatible.  There isn't a single step that can be taken in the direction of more liberty that doesn't conflict with the leftist's views, and there is no step the leftists can take that doesn't take away more liberty.  A presidency farther to the left than we are now will simply destroy the republic.  You know, Bernie, if Hillary Clinton thinks your plans are economic nonsense, you just might be too far out there:


“This is not about math. This is about people’s lives, and we should level with the American people,” Mrs. Clinton said. She then repeated a jab at Mr. Sanders’s reputation as a truth-teller that she would return to during the debate: “You need to level with people about what they will have at the end of the process you are proposing. And based on every analysis that I can find by people who are sympathetic to the goal, the numbers don’t add up.”

I'd like to be more cheery and optimistic about this, but I see two outcomes possible a year, maybe 16 months from now.  In the worst case, Bernie Sanders or the Hildebeest gets elected.  They appoint a doctrinaire anti-gun lawyer like Eric "brainwash people about guns" Holder to the Supreme Court and within six months, Australian-style confiscation starts.  Does anyone not believe that starts open civil war?  On the other hand, someone with a strong constitutional belief system, say Ted Cruz, gets elected and starts working toward restoring personal liberty, cancelling Executive Orders that violate the separation of powers, cancelling the extra-congressional regulations from the EPA or the FCC for example.  Perhaps they figure out a way to kill off Obamacare.  Does anyone think that people on the left, some new version of Octopi Wall Street, won't riot over having their freebies curtailed?   We're not talking about EBT cards showing $00 balance, just ending some of the more recent giveaways.

No, I think it would be a miracle to get to 2020 without open civil war going on, and I don't think Justice Scalia enters into it at all. 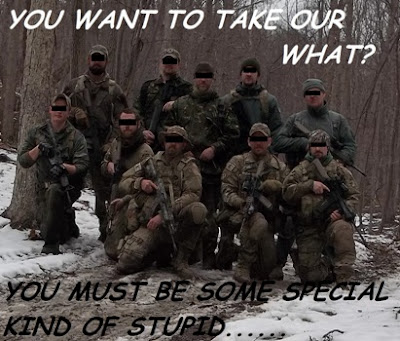