It was Fun Show day here in the Silicon Swamp.  First show of the New Year so we had to drop by.

It was packed.  It looked like peak days all over again, in keeping with the fact that NICS checks just keep setting record after record.  As always, folks were polite to each other and it was possible to make your way around the auditorium.   Well, it was slow to get around.

No, didn't get anything.  I'm looking for a few things that are hard to find.  First, I want to get my hands on a Ruger Precision Rifle, but still haven't seen one.  I've heard they're almost vaporware and selling as fast as faster than Ruger can make them.  There are stories of being on back order and taking months to get.  I'd also like to find a 1911 that was used, even if it's in rough shape - doesn't even really have to be working - so that I can take it apart and use it as model for building one.  Strangely, I saw that Tam wrote about doing almost exactly the same thing a couple of days ago.    I started out saying that, and Mrs. Graybeard said, "If you're going to buy one, why buy junk?  Just get a good one."  Hard to argue with that, but I didn't find that mythical 1911 that was exactly right.  I could see getting one of these little guys, for one, but I also like these.  There was one of the Springfields at the show, but in 9mm, and if I'm going to get one, it's got to be in God's own caliber.  (Note to 9mm advocates: that's a joke based on J M Browning being referred to as a God of firearms design, and since he designed the original 1911 and the 45 ACP round for it, it must be...) 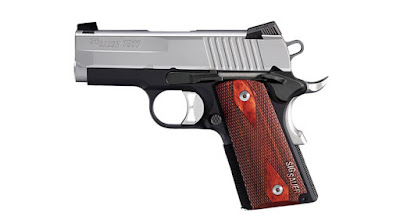