NOAA/NWS Say We're Not Heading into a Maunder Minimum

Back in November, I presented notes on a talk by Dr. Valentina Zharkova (with a video of the talk) in which she advances the prediction that by the 2030s solar activity will be at a level not seen since the Maunder Minimum and the Little Ice Age.


That's the prediction Dr. Valentina Zharkova advances in a presentation of her "Climate and the Solar Magnetic Field Hypothesis" presentation at the Global Warming Policy Foundation in October, 2018.

According to Dr. Zharkova, the deep solar minimum that we appear to be going into is expected to last from "2020 to 2053".

The NOAA/NWS scientists who forecast solar cycles issued their own predictions today (Hat Tip to Watts Up With That) and they disagree with her.


“We expect Solar Cycle 25 will be very similar to Cycle 24: another fairly weak cycle, preceded by a long, deep minimum,” said panel co-chair Lisa Upton, Ph.D., solar physicist with Space Systems Research Corp. “The expectation that Cycle 25 will be comparable in size to Cycle 24 means that the steady decline in solar cycle amplitude, seen from cycles 21-24, has come to an end and that there is no indication that we are currently approaching a Maunder-type minimum in solar activity.” 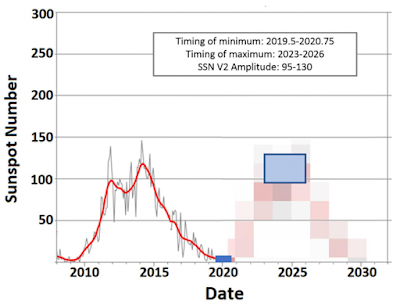 Image used at WUWT credited as from the Twitter feed of NOAA's Space Weather Workshop.

I've never seen this style plot from the Space Weather guys but it's an intuitive way to show where they expect data from the next 11 years (until 2030) to fall.  Perhaps a bit easier to read than a plot with error bars.  Plus, it's better than just copying the cycle 24 activity which seems like what they did.

The inset box at the top right shows their prediction for the minimum of the current cycle (24) to come some time between the midpoint of 2019 (this June) and 3/4 of the way through 2020 (August) and they're predicting the maximum to occur in the window of 2023 through 2026.

What the Space Weather Prediction Center doesn't really tell us is what this prediction is based on, making it essentially impossible to compare their predictions to Dr. Zharkova's.  Dr. Zharkova is very up front about her prediction methods, in fact, they're what the entire presentation is about.  Her work is on the solar dynamo, the magnetic fields that create virtually everything we see on the sun.  It began by observing the sun and attempting to come up with a model to explain the patterns we see.  She then applied modern digital signal processing methods (my words, not hers) to find "principal components" and their periods.   Her first paper that I became aware of in '15 (still on Nature) was based on two principal components while her later paper appearing this past November increased that to four principal components which should increase the accuracy of her predictions.  As it is, she was one of only two that correctly predicted solar cycle 24 would be weaker than cycle 23 - two out of 150 models predicted this.

The only reservations I have about her work is that it's based on a small interval in time, cycles 21-23 (about 33 years).  I go into more details in that November '18 piece (first link).  The Space Weather Prediction Center puts up nothing like her work for comparison purposes.  For predictions of a few cycles, Dr. Zharkova's work has been rather successful and matches the sunspot record back to before the Little Ice Age.

Who's right?  Do we have another little ice age, or does the weather stay like the last 10 years for the next 10?  Guess we just have to wait and see.