It's an interesting perspective that I hadn't really thought of in those terms.  Now that I've read a law professor's opinions on this, I don't think it's far off the mark.  It certainly raises things to think about.

Let me step back and set the story up a little more.  My day-to-day browser in the Windows world is Firefox.  One of the things Firefox set itself up to do is to offer me stories to read when I open blank tabs; those stories are from a site called Pocket.  Pocket appears to be an aggregator, because virtually everything it offers me is on site other than their own, but they actually do offer some content of their own.  In this case, “The ‘Internet of Things’ Is Sending Us Back to the Middle Ages” by author Joshua A.T. Fairfield, a Professor of Law at Washington and Lee University, is that content.

Fairfield opens by telling a story you'll probably recall; about a Las Vegas casino that was hacked through its fish tank.


The tank had internet-connected sensors measuring its temperature and cleanliness. The hackers got into the fish tank’s sensors and then to the computer used to control them, and from there to other parts of the casino’s network. The intruders were able to copy 10 gigabytes of data to somewhere in Finland.

He goes on to argue that the problem with Internet of Things (IoT) appliances like this fish tank is that we don't control them and it's not always clear who does.


In my book, “Owned: Property, Privacy and the New Digital Serfdom,” I discuss what it means that our environment is seeded with more sensors than ever before. Our fish tanks, smart televisions, internet-enabled home thermostats, Fitbits and smartphones constantly gather information about us and our environment. That information is valuable not just for us but for people who want to sell us things. They ensure that internet-enabled devices are programmed to be quite eager to share information.

He goes on to talk about the Roomba issue that came up a few years ago - Borepatch covered it and while it was talked about, I don't think it was deadly bad P/R for the manufacturer, iRobot.  If you forget, the higher end Roombas were mapping owners' homes so that they could optimize their routes.  Early Roombas went in a line until they hit something, turned and went off in a more or less random direction.  The room-mapping units were more efficient.  Then it was leaked that iRobot was looking to share those maps of the layouts of people’s private homes with its commercial partners.

As Borepatch frequently adds, security wasn't an afterthought, it was never thought of.  Why should iRobot have any access to a map of your house?  Why should they be allowed to sell that information?

Fairfield goes on to conclude a real problem is ownership.  You know that when you buy software, you're not taking ownership of it, you're licensing the ability to run one copy of it.  When you buy the latest snazzy smartphone, you're buying a useless piece of hardware because without the software it's running, it's not even a plain old phone: it's useless.  (We used to joke you bought a paperweight, but they're too light to be a paperweight!)

This idea is spreading to mechanical, physical things, not just software.


This sort of arrangement is destroying the concept of basic property ownership. John Deere has already told farmers that they don’t really own their tractors but just license the software – so they can’t fix their own farm equipment or even take it to an independent repair shop.

Divemedic over at Confessions of a Street Pharmacist has posted stories about Tesla motors essentially doing the same things, and turning off features in the cars' software if the car was bought used from a previous owner and running software not installed by Tesla themselves.  Nearly 15 years ago, there was a new name in home Digital Video Recorders: TiVo.  TiVo originally sold their DVRs by hard drive size and computer geeks quickly realized they could buy the cheapest DVR and replace the hard drive with one from their local store.  TiVo did their best to stop that before failing.

Where does the concept of the middle ages come in?  Back to Fairfield:


The issue of who gets to control property has a long history. In the feudal system of medieval Europe, the king owned almost everything, and everyone else’s property rights depended on their relationship with the king. Peasants lived on land granted by the king to a local lord, and workers didn’t always even own the tools they used for farming or other trades like carpentry and blacksmithing.

Over the centuries, Western economies and legal systems evolved into our modern commercial arrangement: People and private companies often buy and sell items themselves and own land, tools and other objects outright. Apart from a few basic government rules like environmental protection and public health, ownership comes with no trailing strings attached.

This system means that a car company can’t stop me from painting my car a shocking shade of pink or from getting the oil changed at whatever repair shop I choose. I can even try to modify or fix my car myself. The same is true for my television, my farm equipment and my refrigerator.

Yet the expansion of the internet of things seems to be bringing us back to something like that old feudal model, where people didn’t own the items they used every day. In this 21st-century version, companies are using intellectual property law – intended to protect ideas – to control physical objects consumers think they own.

If we truly own our own technology - I'm thinking our tablets or phones - we should be able to write software for them, or modify the Operating System if we feel we're qualified to do so.  The Android universe might be more accepting of that, but I know the Apple iOS people would do their best to stop anything that isn't in their App Store model.  Android for phones was rumored to be written by Google so that they can get their snooping technology into as many people's lives as possible - so they can harvest more data about users and sell it.


We need the right to fix our own property. We need the right to kick invasive advertisers out of our devices. We need the ability to shut down the information back-channels to advertisers, not merely because we don’t love being spied on, but because those back doors are security risks, as the stories of Superfish and the hacked fish tank show. If we don’t have the right to control our own property, we don’t really own it. We are just digital peasants, using the things that we have bought and paid for at the whim of our digital lord. 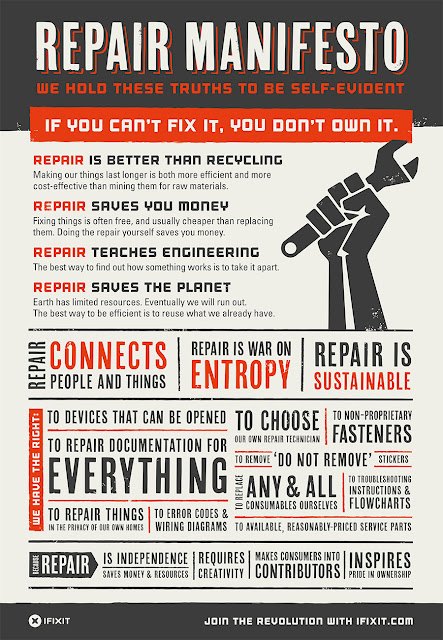