SpaceX is nothing if not a disruptive force in the aerospace industry.  From the hi-tech company model of prototype as soon as possible, fail early and correct quickly to the industry leading recovery and reuse of boosters, they seem to be always innovating and always pushing forward.  To borrow the cliche', they're always thinking outside the box.

I admit to missing this story on the 6th when Teslarati published it, but in the effort to improve the manufacturing of their stainless steel Starship, they're looking into the machines that build water towers to find ways to make the assembly faster and higher quality.  The first revision of this article included the following text:


A SpaceX engineer says that the company wants to adopt commercially-available manufacturing equipment that could allow its Boca Chica, Texas team to build Starship tank parts in minutes and nearly-complete rocket bodies in a matter of days.

Originally created to meet the needs of a variety of different companies – typically oil and gas related – that need efficient, affordable, and standardized storage tanks, a small but growing niche exists for semi-automated tank production. While there is some clear uncertainty given that the quality and consistency required for oil and gas needs or even simple water storage likely isn’t the same needed to meet strict spaceflight margins, SpaceX has already acquired several production tools from existing contractors and is working around the clock to prove that those same tools can be used to build large, reusable rockets.

The gamble is simple: if it turns out that off-the-shelf (COTS) equipment can become an almost turnkey solution for manufacturing high-quality Starship spacecraft and Super Heavy boosters, SpaceX may have found a shortcut to orbit, avoiding the huge expense of finding and building its own custom production solutions. But is that COTS tank fabrication hardware truly up to the task?

In response to that final question, Elon Musk replied to the Teslarati team with a lot of detail.  It now leads the article off.


This isn’t quite correct. An orbital rocket needs precision that’s 3X to 4X better than a water tower, so super precise parts, fixtures & welding are needed. Suborbital is much more forgiving.

That said, although substantial capital & engineering is required to achieve extreme precision, marginal production cost of the primary structure should actually be *less* than a water tower, because it’s built inside a factory in volume.

Unmodified water tower machines do not work well for orbital rockets, as mass efficiency is critical for the latter, but not the former. Hopper, for example, was made of 12.5mm steel vs 4mm for SN1 orbital design. Optimized skins will be [less than] 2mm [thick] in places across a 9000mm diameter. [Note: everything in square brackets my edits -SiG]

An interesting problem is how to support these 9 meter diameter steel skins that are 2 mm thick.  That's close to .080" thick across 29-1/2 feet diameter.  It ought to behave like an overgrown piece of paper with those dimensions.

The fact that SpaceX engineers are studying how the oil and gas industry gets tanks fabricated and how to modify those welding machines for the higher precision they need for spaceflight is interesting enough in itself.  If a solution to a similar problem already exists, it's generally cheaper and easier to adapt the old tool to the new problem than to invent an entirely new tool. 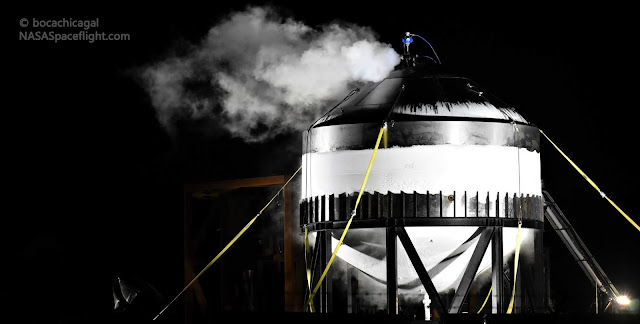 SpaceX's second test tank made it to about 50% higher pressure than it was required to survive, demonstrating that it's safe enough for manned space flight.  This was all hand-welded by very skilled welders on fixtures SpaceX developed.