This morning, SpaceX successfully launched their fifth load of 60 Starlink satellites, reaching 300 satellites on orbit.  The only bad part of the mission was that the booster missed the recovery drone ship OCISLY (Of Course I Still Love You) and hit the water just off screen to the right of where the stationary cameras on the drone are aimed. 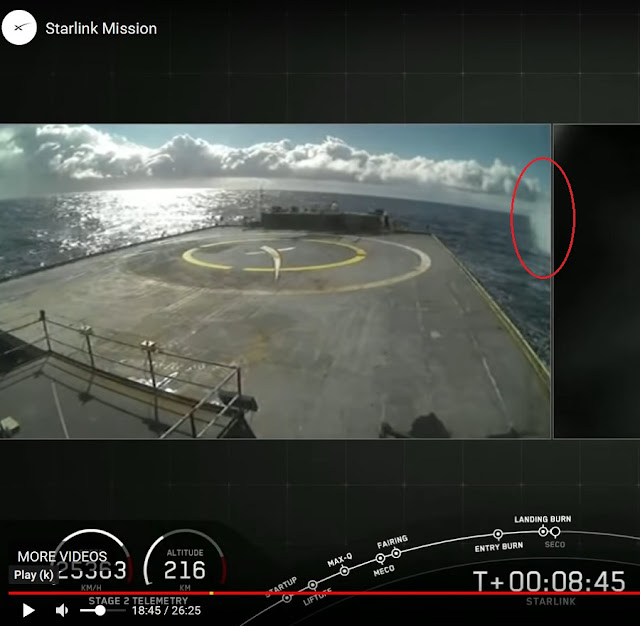 Screen capture from the SpaceX video coverage moments after the booster hit the water - the circled area is the cloud of water it threw up - a few seconds later, some of those droplets show up on the camera.

While the mission is to put the 60 satellites in orbit, the booster (B1056) was a big part of the story for this mission.  First off, the booster last flew 62 days ago, making this a SpaceX record for the fastest turnaround to flight for a used booster.  A footnote to that record is that if they had successfully landed the booster it would have been their 50th successful booster recovery.  That milestone will have to wait.  Plus, that was B1056’s fourth launch in 10 months, which is unheard of with any other orbital-class rocket in existence.  The typical orbital class rocket still has a life of one use.

Since this was 1056's fourth launch, with a design lifetime of five launches, they're probably not going to try to drag it back into Port Canaveral from 390 miles offshore and spend the money/effort to refurbish it.  It would be worth knowing what the failure's cause was and especially if it was a result of deficient or defective work during that record 62 day turnaround. It's possible the reason is in data transmitted down during the flight and will be found by review of telemetry.

Recovery of the fairings was another stated goal of the mission, but since I can't find mention of it anywhere I'll assume they were unable to catch either half with their two recovery ships.

Another new thing in this mission was the launch profile.  Until today, the launch of these satellites followed a pretty standard template.  They launch and burn the second stage until they reach a spot in orbit where they turn the engines off and let the system coast upwards, gaining altitude for some time.  At the right time (I believe at the farthest point - or close to it), they fire the second stage again and circularize their orbit.  For this mission, they released the satellites into an elliptical orbit at a lower point for check out.  Once that's complete, small ion thrusters on the satellites will put them in their final circular orbits at 340 miles altitude.  This was said to require more out of the first stage booster and make recovery more difficult.

Eric Ralph at Teslarati has some good stuff here:


Based on the fact that B1056 kicked up visible sea spray just a few hundred feet from OCISLY’s deck, as well as the distinct lack of an obvious explosion, it looks likely that the Falcon 9 booster suffered some kind of navigational failure. It’s possible that it experienced the same hydraulic failure that disabled B1050’s four grid fins, but a new kind of failure – like anomalous GPS readings, a broken laser altimeter, failed Merlin 1D engine thrust vectoring, or something more complex – could be the ultimate source of the missed landing.

Regardless of whether parts or the entirety of the booster can be recovered, SpaceX will almost certainly learn a lesson (or several) from Falcon 9 B1056’s premature demise, hopefully allowing future rocket landings to avoid the same fate. Most importantly, today’s primary objective – placing 60 new Starlink satellites in orbit – was a flawless success, even if B1056’s loss is still a blow. SpaceX’s next Falcon 9 launch is currently scheduled no earlier than (NET) March 2nd and is unlikely to be delayed by today’s events.

My 2 cents worth: this mission was more visible than the last Starlink launch, but enough scattered clouds in just the wrong places to restrict it to maybe 20 seconds out of the 2 minutes or so we can see well.  Then I came in to watch the booster recovery and the near miss.