After a few days of delays, SpaceX successfully placed another 60 of their Starlink satellites in orbit with a launch at 9:06 this morning Eastern time.  It was “one of those days” from my viewing site (the east side of my backyard); there were just enough clouds in just the right position that I didn't see even a glimpse of the launch.  Once it reached 1st stage cutoff and there was no chance of seeing anything, I came inside to watch them stick the landing.  This video should start just before the video switches to watch the first stage landing on their drone ship.

The video is one hour 15 minutes long, their entire launch coverage, so it includes all the milestones you'd want to see plus every minute of wait time (that you can fast forward through), if you're interested.

In addition, they continue to attempt to catch payload fairings with two recovery ships on the calculated target for the fairings.  Recovery vessel Ms. Tree caught one of the two payload fairing halves. Ms. Chief just missed the other one, the company said on its webcast. 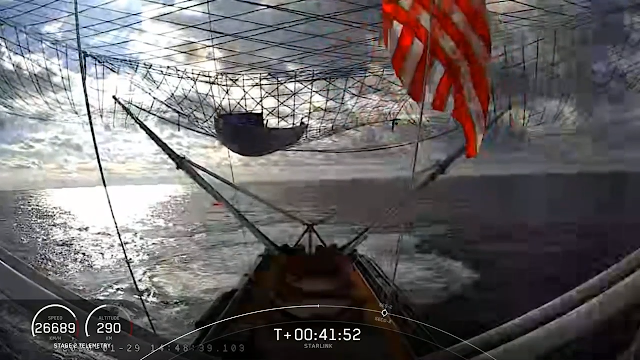 Ars Technica reports this is the fourth flight of this Falcon 9 first stage and the successful recovery means they'll probably go for a fifth.  The design life is supposed to be five flights and I'm personally interested in seeing if they'll attempt a sixth launch of some booster.  My gut feeling is that they'll find a test mission or something without a paying customer and try a sixth.

Finally, this mission contains a test of some new technology for the Starlink satellites.  The last time I talked about these, 18 days ago, I mentioned that there was growing concern in the astronomical community about reflections from the satellites ruining meticulously arranged photography.


In response, SpaceX has begun experimenting with darkening treatment and will consider other measures. SpaceX founder Elon Musk has said he is sympathetic to the concerns of astronomers and will take steps to ensure the fidelity of astronomical observations.

A darkening treatment, not exactly like Virginia Governor Jolson Klanrobe's blackface, but more like an optical black anodizing treatment.  It will be interesting to see how well that works.