Dumb Quote of the Week

It turns out Bernie's Dr. Stephanie Kelton isn't the only one spewing idiocy.

I get a daily email from a precious metals dealer called Money Metals Exchange, and they'll feature any great monetary idiocy they come across.  They link to Narayana Kocherlakota, the former President of the Federal Reserve bank of Minneapolis, who wants you to know the Federal Government can never borrow too much money.  He wrote an opinion piece for Bloomberg online that has a couple of astounding quotes.

The first is setup:


Policy makers and voters often express concern about the level of the federal deficit, which topped $1 trillion last year, and the national debt, now more than $23 trillion. But, unlike a household that owes money to a bank, the U.S. government has the ability to tax its creditors. This power means that the federal government can afford any level of debt that is owed to American taxpayers.

And the payoff is a few paragraphs later.  First the setup: the government's debt is $100 Million per person in the US (he doesn't specify every taxpayer in the US although he implies that), an amount that's many times the current debt, then specifies that the interest rate is 5% which is higher than the current rates.  How can the government begin to pay this, a figure that amounts to $5 million per person per year?  It's here I find the QoTW.


Suppose first that all U.S. taxpayers are exactly the same financially and so they each own the same amount of U.S. government debt. Then, the government can tell each person: your tax bill for this year and every year thereafter is equal to $5 million. People can pay this seemingly huge tax by handing over the $5 million in interest that they receive from the government.  The entire process of taxation and debt finance ends up being a complete wash.

That means every single taxpayer buys government bonds that pay them $5 million interest every year,  and then turns that $5 million over directly to the IRS!!

Why exactly would anyone who could afford to buy $100 million worth of bonds buy bonds that pay them a net zero?  What if the Chinese or another government actually paid them interest that they could keep?  He doesn't propose or answer this simple question.

After this, he says there's nothing special about these numbers, and goes on to say:


Indeed, if it wanted, the government could retire its entire debt in a similar fashion, rather than simply paying the interest.


The logic of the argument does depend -- critically! -- on the debt being owed to U. S. taxpayers. When the U.S. government borrows from non-taxpayers, such as the Chinese government, it becomes much more like a household that is borrowing from a bank. There is, accordingly, a limit on the level of debt or deficit that can be considered sustainable.

He goes on to say that we currently pay 30% of one year’s gross domestic product to foreign entities, and argues that translates into a non-taxpayer interest obligation of less than 1% of GDP which is “eminently affordable.”

As is often the case, I'm left wondering if he really believes this or he's just trying to sell us on it.  He says, “The government can borrow as much from taxpayers as it wants,” but that's not what's going on.  The fed is creating currency out of thin air.  The Fed is selling bonds to themselves with it, and they're selling bonds to China, Japan, the EU and other foreign entities.  I'm sure some Americans buy American bonds, but it's nowhere near the total amount of debt.  His already-lame arguments don't even seem to apply to the situation he's talking about. 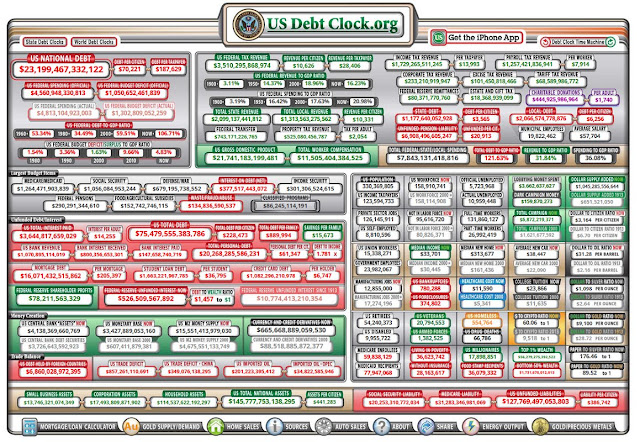