The Other Kitchen Exeriments Going on Here

Besides the barbecue stuff I wrote about Saturday.

Exactly why I'm experimenting with ice cream probably needs a little explanation, but as little as possible.  For the last five years, I've been following a ketogenic diet.  Much like Denninger talks about, but I talk about it much less than Karl Does.  A quick search of the term says I've mentioned it once.

The essential requirement of a ketogenic diet is eating few enough grams of carbohydrate to enter a state of benign dietary ketosis, where your body is primarily burning fat for fuel and producing a few different ketones that circulate in our blood.  For most people, a carb intake guaranteed to get you into ketosis is 20 grams per day.  Many of us can handle more, some require virtually zero.  If you're not used to counting grams of carbohydrate 20g won't mean much, but a single apple or single slice of bread usually gets you close to or over 20g.

I don't want to get into details on that - there are plenty of useful sites (professionals 1 and professionals 2) to help if you really want to understand it - just know that essentially zero sugar is going to fit in 20g/day so my ice cream has to be zero sugar and close to zero carbohydrates.  This matters because sugar molecules affect the way the ice cream freezes and the resulting textures.

Several months ago (September?) the nearby Publix started carrying ice cream from a startup specializing in keto ice cream.  It had been years (six? eight?) since I'd had ice cream, it was hot enough to melt aluminum on the sidewalk, so I bought a pint.  Suffice it to say it was a good treat, but eventually I decided it wasn't exactly what I liked. For example, they have a "cherry chip" flavor, but frozen chocolate chips feel like almost like shards of ceramic.  I thought $6/pt for ice cream I'm not that wild about is silly but it was a starting point that got me thinking of trying to make my own.  I stopped buying a pint every week.

Then came Christmas and while shopping for family, we decided to gift ourselves one of these ice cream makers.  Ice cream makers have changed a lot since I last looked at them.  When I was a kid, my parents had a maker that we'd fill with ice layered with salt and crank and handle to spin a container of ingredients.  This one I got operates completely differently; there's a container inside that has a gel you freeze by leaving it in a freezer for 12 hours before using it - or all the time when you're not using it.  There's a paddle assembly in it and a motor spins the frozen container with the mixture you're making.  The mix in contact with the walls freezes instantly, it's scraped off and replaced, and eventually turns into something with the texture of soft-serve ice cream.  My first batch was plain vanilla, here. 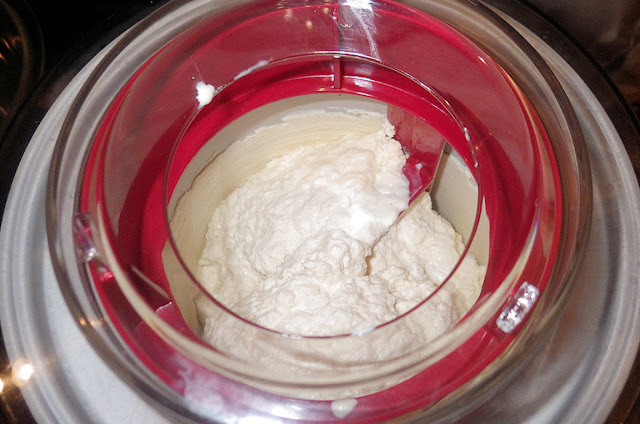 This is literally four ingredients:

Shortly after this picture was taken, the soft serve was put into a plastic container and frozen overnight.  Taste-wise, it was fine, but the texture left a little to be desired.  It was a little hard, but even the store-bought ice cream was a bit hard.

Last weekend, we did a batch of coffee ice cream, one of Mrs. Graybeard's favorite flavors.  That had more of an ice texture; it felt like larger ice crystal than I'd like.  Like the vanilla, the taste was fine.  I think the water in the coffee (more than one 8oz cup) is what caused the ice crystal sensations.

This weekend, I tried a cherry vanilla recipe and it came out great.  This is the batch after coming out of the Cuisinart and packed to put in the freezer.  It needed to freeze overnight. 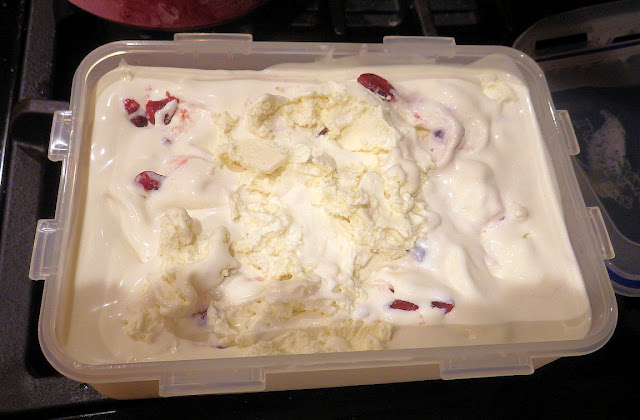 This is a little more involved.

The preparation is more involved than the other two, and consists of whisking the eggs a couple of minutes and then whisking in the other ingredients.  In return, the texture is much better.  The only ingredients in there a non-keto person probably doesn't recognize are Swerve brand artificial sweetener (which is mostly the sugar alcohol erythritol) and xanthan gum, which is typically used to thicken gravy.

In comparison, here's the ingredients for the Rebel Creamery cherry chip:

Ignoring the ingredients for the chocolate flakes, there are 15 ingredients in there.  There are eight in mine.  From what I know, the chicory root fiber, glycerin, two carob gums, and guar gum are all used to help the texture.

I literally had something like this in mind when I thought of getting the ice cream maker.  Instead of their chocolate shards, bits of frozen cherries.  I'm not sure what the next mix will be, but a similar vanilla base with raspberries (lower sugar than cherries) or some other flavor highlights seems likely, along with a bit more research into how to get the coffee ice cream smoother.